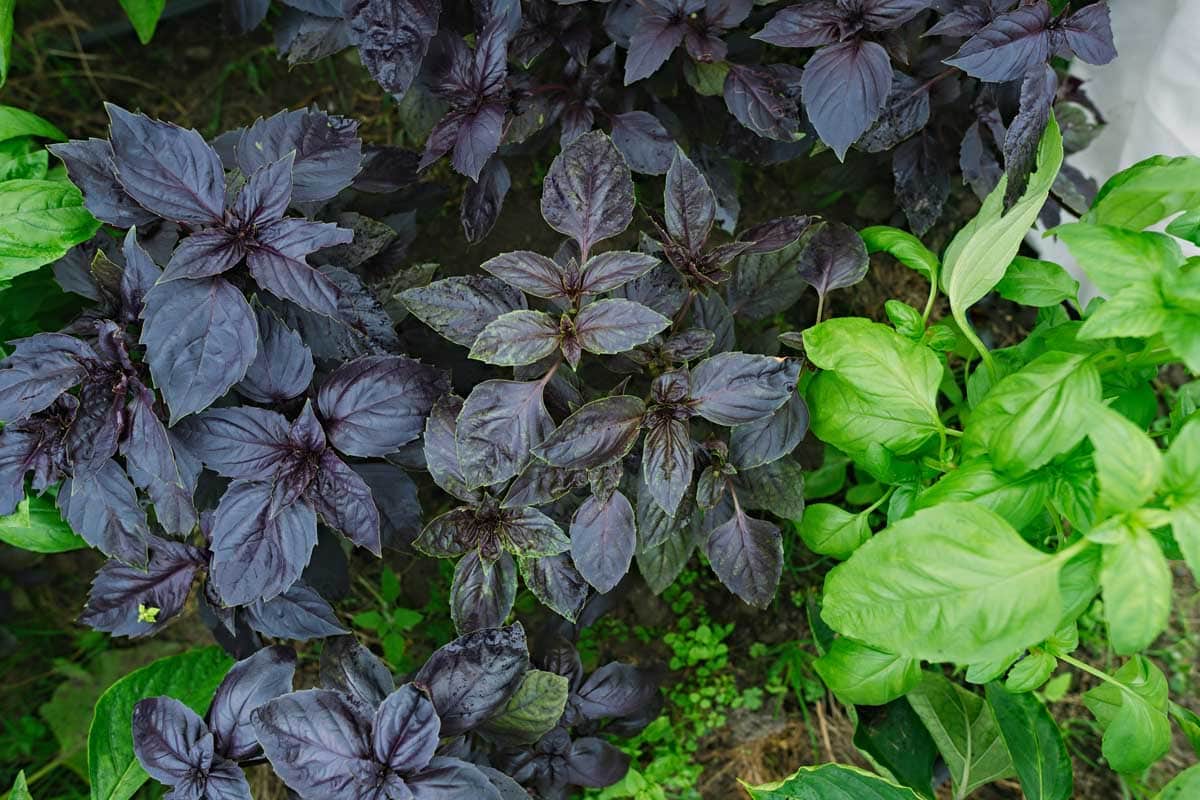 There are over 50 varieties of Basil as well as some plants that are not true basil but are grown as such due to similar characteristics. Some varieties have a hint of citrus, while others have a cinnamon or a licorice-anise flavor. Some have purple leaves but most are green.

Basil is used by many ethnic groups, but most commonly in Italian dishes such as pesto and salads. Basil varieties have subtle differences in taste as well as size, and general overall appearance.

Cardinal basil is taller than most varieties reaching about 1.5 feet in height, sometimes taller. It produces tight cardinal red to deep burgundy blooms. The leaves are dark green and oval. Although it is tall it has a bushy growth habit so needs more spacing than most varieties. Strong anise-licorice flavor and aroma.

Christmas Basil differs from other varieties in that it is more cold tolerant and in some regions will endure up till Christmas. It has shiny green leaves and small purple flowers. the plant will reach up to 1.5 feet but is generally about a foot in height. Its flavor is a tad fruity and has been compared to wine. Its aroma does not betray its taste in that it has an evergreen scent reminiscent of pine. The origin of its name “Christmas” is uncertain whether it comes from its cold tolerance or pine like aroma.

Cinnamon basil is tall and bushy reaching around 3 feet in height with an equal girth. The leaves are thin and serrated. Coloration green leaves and lilac colored stems, pointed light purple flowers. Cinnamon basil has a mild cinnamon flavor and aroma from which it acquired its name.

Popular variety produces deep purple leaves and lilac flowers. Reaches 12-18 inches in height and is easily maintained. In the culinary realm it is more full flavored and pungent than standard sweet basil and is used for both its flavor and color. Dark purple so far as flavor is concerned has been compared to ginger with a hint of anise. It also has a strong aroma which shadows the flavor.

A sweet basil and one of the most commonly cultivated. It is an Italian variety and is not in the least bit cold tolerant. Its leaves are a crinkled dark green and extremely tender. Popular in pesto and assorted sauces and salads. Should be started early indoors in most regions or outside after any danger of frost. It has less of a tendency than standard sweet basil to become bitter after extended periods of cooking and is also less likely to bolt to seed than other varieties.

Greek Basil has a a tight compact growth habit that forms a nearly perfect manicured globe without being pruned. The leaves are minute and bright green. The plant is small averaging about 1/2 to 1 foot in height, sometimes a tad taller. It is generally grown as an annual in most regions but has been known to grown for several seasons in warmer climates. It lends itself well to both edible gardens as well as landscape scenarios. It is mildly sweet and spicy and has been compared to cloves, so far as aroma is concerned it mimics the flavor but is not overly aromatic.

This cultivar reaches a height of up to 2 feet and roughly 1.5 feet wide. Its leaves look like immature lettuce leaves, they are lime green and ruffled. The flowers are pinkish white, sometimes more white than pink. It is more delicate than many other varieties and requires slightly more care, it’s roots are thin and shallow and easily disturbed and it is not in the least bit cold tolerant. The flavor is comparable to sweet basil with a hint of cinnamon, just a hint mind you.

Holy basil attains a height of up to 1.5 feet. It has a bushy growth habit and produces stems and leaves that range in color from light green to dark purple. There are a number of cultivars referred to as Holy or sacred basil and the taste and aroma varies somewhat. My experience leads me to describe it as reminiscent of a menage a trois between mint, cloves and habanero – very very mild habanero.

So named “Lemon” because it has a citrus flavor and aroma. The plant produces slender and narrow light green leaves. The flowers differ little from other basil cultivars in appearance but emit a lemony aroma. If you’ve ever grown lemon balm, the scent is pleasantly similar. This plant will easily bolt, if and when it does it is useless from a culinary point of view but just dandy if you plan on saving the seeds.

Similar to lemon basil but very difficult to locate. Reaches just shy of 2 feet in height with a girth about half that.

An Israeli company has developed a long living Basil Tree [ 5 year estimate] , which they claim produces a non stop harvest [In the right hardiness zones]. It is called very simply the Mini Basil Tree. It is a grafted plant with a woody trunk, just like any other tree. It has a huge crown of basil leaves.

Green and white variegated leaves, columnar basil variety reaching up to 3 feet in height, more commonly closer to 2 ft. Does not produce flowers which is advantageous in that all the plants energy goes into producing abundant harvests for a longer duration. It was bred from another variety known as basil Lesbos which is also no flowering. Has a basil taste [ya think :>} with just a hint of citrus.

Named not only for its purple foliage but also its roughly 3 inch long ruffled leaves. Works well as either an ornamental or edible garden member. Height 1.5 to 2 feet. Has a mild sweet basil flavor with a hint of cinnamon and Anise.

Compact small bush growth habit that was bred from Dark Opal Basil. Dense leaves are 3 to 4 inches long, fairly large in comparison to the plant itself, they are smooth and flat and purplish red or reddish purple depending on whether your glass is half full or half empty. Very easily grown in comparison to other cultivars with a higher germination rate. A stronger flavor than most sweet basil varieties which makes it popular for vinegar, dressings and oils.

There are multiple varieties of Sweet Basil – Ocimum basilicum. In addition there are also related species and hybrids commonly referred to as basil. The varieties used in Italian cooking are generally called sweet basil – see Genovese Basil [Above]. Other Sweet Basil varieties include Dark Opal, Red Rubin, Cuban Basil, Lemon Basil and others.

A dwarf basil developed by Burpee that averages about 10 inches tall. What it lacks in height it makes up for in vigor. Summerlong retains its bushy stature and and produces longer than other varieties. It is somewhat cold tolerant so far as basil is concerned and is less likely to bolt to seed unexpectedly. It also matures fairly quickly 30 – 60 days.

There are multiple cultivars known as Thai Basil. This section refers to the Thai Basil sometimes called Siam Queen. It is related to mint and is sometimes classified as a sweet basil. Siam Queen is native to southeast Asia. The plant produces narrow green leaves, purple stems, and pinkish purple flowers. The leaves of this variety are larger than other Thai varieties and hence produces a much larger yield. It attains an average height of 1.5 to 2 feet and grows in an upright bush habit. The flavor is spicy sweet with only a hint of cinnamon and licorice. 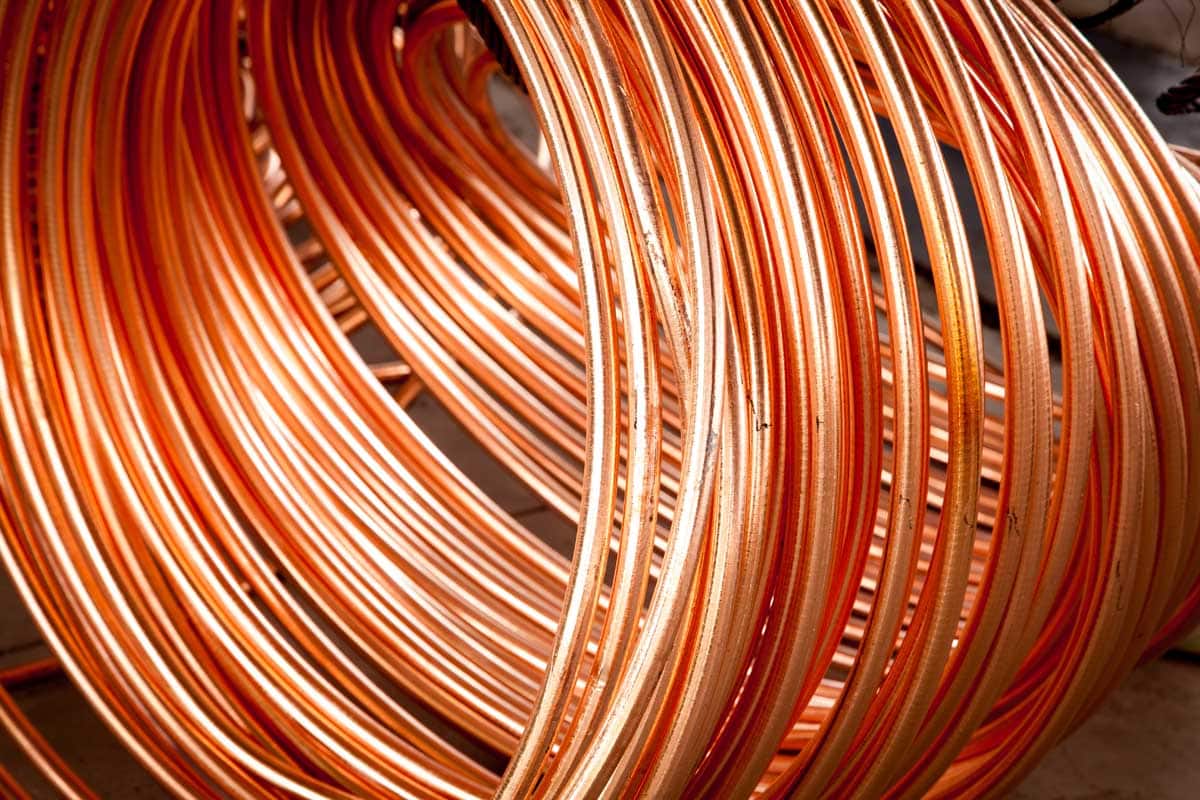