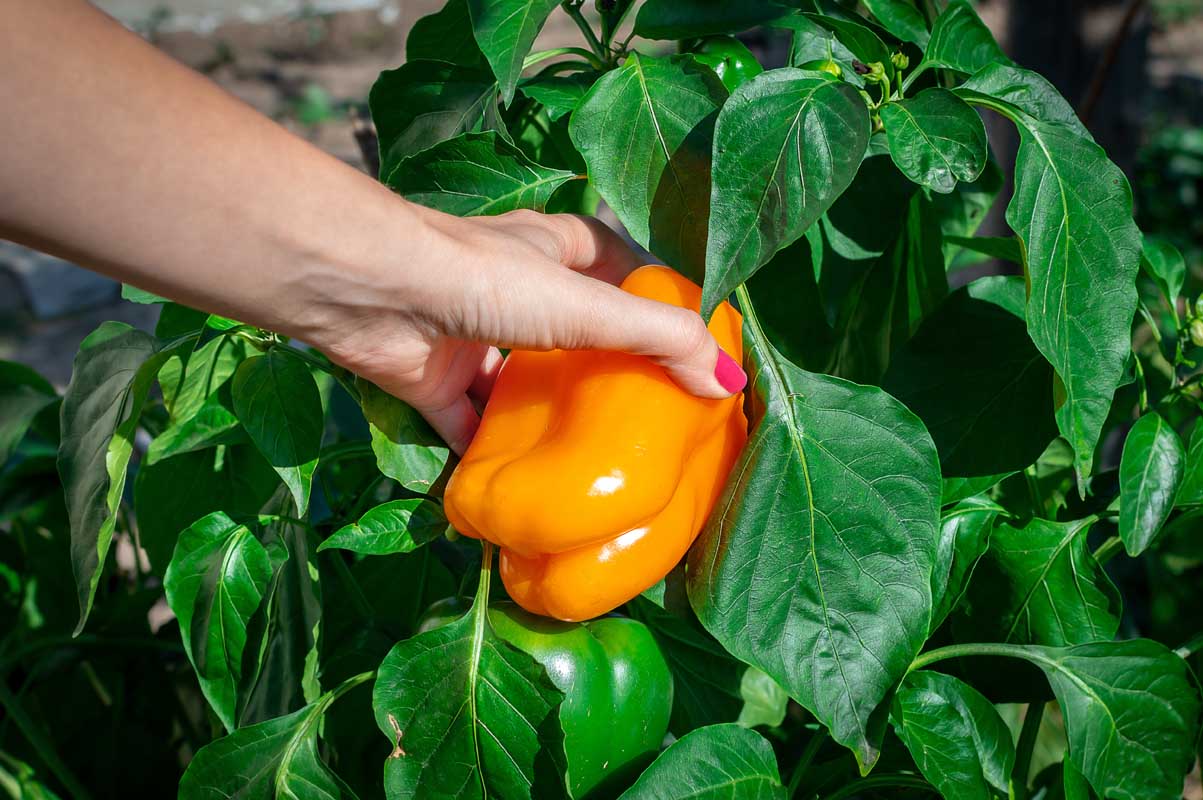 Intercropping of Alliums, in particular Onions and Garlic has been demonstrated to have substantial impact on pest populations.Aphids and other sap sucking green flies and their maggot offspring, leafhoppers and bean beetles were repelled from the pepper crops. [1]

Garlic is a natural insect repellent it releases odors that are proven to deter many insects and people as well, it also releases sulfur into the soil which serves as a natural fungicide. Studies with related alliums, leeks and chives have shown that the odor they give off repels aphids which is great for hot / chile peppers which actually emit an odor that attracts aphids.

Once again, contrary to popular belief beans and peppers can and do have a symbiosis when inter-planted. Chile peppers will actually produce higher yields when interplanted with beans than when grown alone.

In addition to its obvious ability to provide shade it is documented that corn will help protect against aphids, and reduce the incidence of plant disease in peppers.

Hot peppers are a tad confusing. There are at least 100 varieties that will readily cross-pollinate. Another oddity is that when hot peppers are grown in a stressful or very hot environment, the acids in the fruit accumulates and you get a much hotter pepper. In moderate climates it tends to be a kinder gentler pepper.

Excessively hot weather can also cause peppers to drop their blossoms, and-or fruit, so providing some shade is helpful – not full shade just some shade.

Many hot pepper varieties benefit from being inter-planted with companions that will provide a partial shading and wind break. Plants that provide this amicably are …

Lovage – Interplanting benefits to peppers is limited to shading and wind protection where needed. It is believed to improve the vitality and the flavor of many garden vegetables although this is undocumented.

Marjoram – A low growing herb is believed to improve the vitality and the flavor of many garden vegetables. The flavor enhancement aspect is undocumented but so far as increasing the vitality of peppers – yes marjoram certainly does. Pepper plants thrive on high humidity – not dry hot heat – Marjoram works well as a living mulch / ground cover in retaining moisture and hence humidity. It is non-competitive with peppers and there are no antagonistic interactions.

Marjoram is a hardy and versatile plant that doesn’t require a lot of fertilizer. Maintain the proper pH range and Marjoram will basically take care of itself.

Basil will also work in the same fashion as Marjoram , but is somewhat competitive. Basil is also said to enhance the flavor of peppers – once again taste is in the mouth of the beholder.

Eggplant – close relative of peppers, can be inter-planted with peppers in moderation, in excess it will add to the attracability to insects. Eggplant has successfully been used as a trap crop for aphids in commercial operations, although I woldn’t recommend this to home gardeners as sacrificing your eggplants to protect the peppers doesn’t seem like a winning proposition. Instead, Try using Radishes – they are quickly maturing, and will lure flea beetles away from susceptible plants. The damage flea beetles can do to radish will not be as devastating. Even if you loose a few radish plants – C’est la vie.

Grow Tomatoes -close relatives of peppers, can be inter-planted with peppers in moderation, in excess it will add to the atractability to insects.

Okra – another close relative of peppers, can be inter-planted with peppers in moderation, in excess it will add to the attract ability to insects.

Marigolds won’t provide much shade, but they are good companions to pepper plants. They release a substance into the soil that deters nematodes and some other micro-organisms that are harmful to plants. Do not expect to see immediate results when planting them, the compound needs to accumulate for several season before it becomes highly effective.

Carrots inter-planted with peppers will work for the shading/mulch effect of the carrots on the peppers. Peppers are also members of the nightshade family and secrete a natural insect deterrent called solanine which eliminates many insects that are harmful to carrots. Peppers are not as good as tomatoes for their solanine content but they are helpful.

1. – Annals of applied Biology – The influence of intercropping with Allium on some insect populations in potato

2.Crop land use efficiency in sequential intercropping systems with vegetables.

3. Seasonal Variation in the Water Uptake and Leaf Water Potential of Intercropped and Monocropped Chillies

4. Effects of bean population and row arrangement on the productivity of chilli/dwarf bean

Kiwi Strawberry is it Real or another Hoax