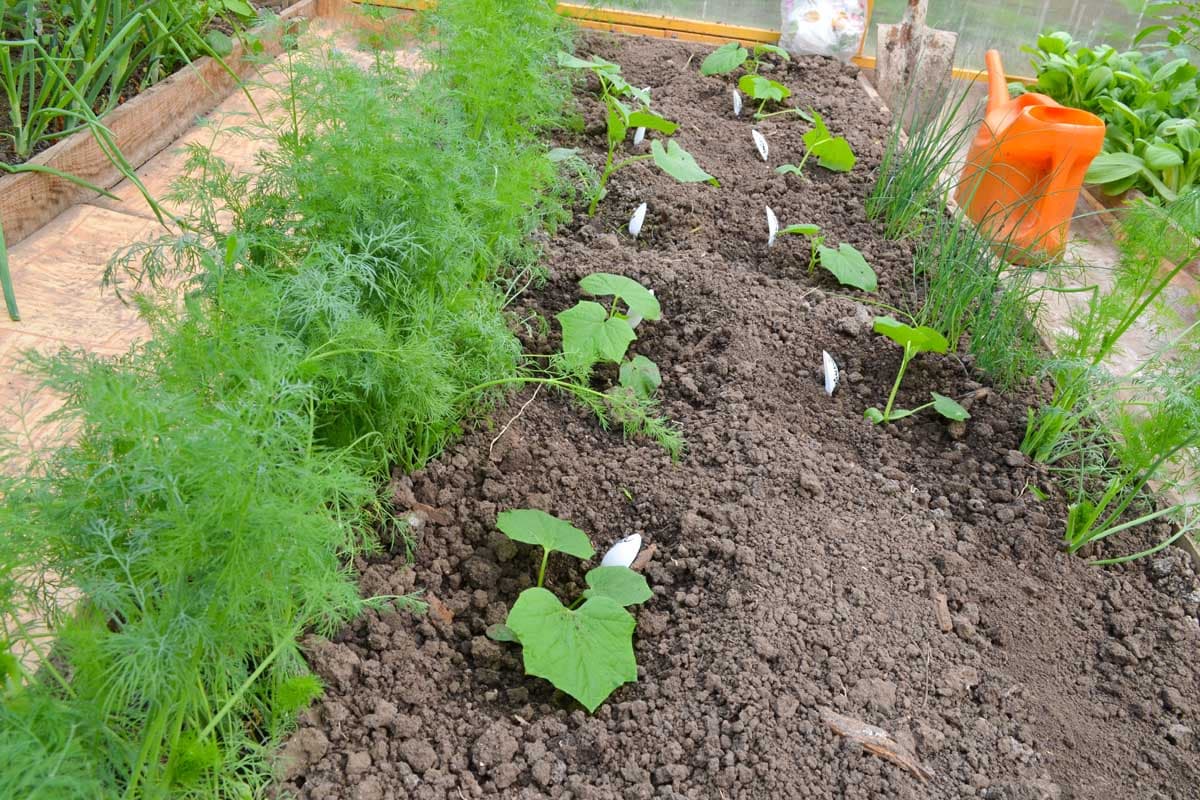 Companion Planting is the placement of various crops in close physical proximity to one another so as to symbiotically compliment each others health, vigor, growth and the flavor of their produce.

It also naturally involves separating plants whose development is antagonistic to each other.

Aromatic Herbs- -The strong aroma and flavor of these herbs may be helpful in repelling some pests but unfortunately it has a negative impact on cucumber plants, adversely affecting the taste.

Dill is an exception to this, cucumbers and dill not only work well together in a pickle brine – but also in the garden. Sage on the other hand should never , ever be planted near cucumber, you may get some vibrant looking cucumbers that you’ll spit out once you’ve taste them.

Potatoes – Cucumbers grown with or near Potatoes are much more likely to be affected by phytophthora blight. Avoid planting potatoes and cucumbers or other curcubits in the same bed , or even in succession with them.

The potato roots and tubers also emit phytotoxins that adversely effect the growth of cucumbers and other curcubits.

Corn and Cucumbers are compatible, cucumber and other curcubits can be grown with maturing corn stalks, and will serve as a living mulch, although not as efficiently as some plants and will themselves benefit from the shade of summer sun. Be sure to use varieties that fare well in partial shade. Expect to see slightly lower yield from curcubits grown in this fashion.

The only disadvantage to this scenario is that the cucumber vines, when allowed to trellis on the corn will at times overburden and weigh down the corn stalks, you may need additional supports for some of the corn plants.

Sunflowers grow very quickly, they can reach a foot in height within a few weeks. When you plant the cucumbers near sunflowers, use seedlings not seeds. The sunflower will mature long before the cukes, leaving the cucumbers a full grown sunflower to climb up.

Some sunflower plants are gigundous and may need staking to prevent them from toppling over.

Some varieties of sunflowers are slightly alleopathic, meaning that they emit compounds – phytotoxins which inhibit the growth of nearby plants. This doesn’t seem to be of a major concern for cucumbers and curcubits as the advantages far out weigh any minor disadvantages.

There is minimal evidence that sunflowers stunt cucumber growth. They do however inhibit seed germination, which is why the cukes you plant around sunflowers should be transplanted seedlings not seeds. Also See: Do Sunflowers make Cucumbers Sweeter ?

Beans and legumes draw up nitrogen from the soil as well as drawing it from the atmosphere. Beans rarely need to be fertilized, they do it all by themselves. On the other hand cucumbers are heavy feeders and require a lot of fertilizer. Grown together the beans fertilize the cucumbers.

Experience has taught me that Some climbing beans and peas do not fare well together as the competition for space and the vines intertwining and strangling each other out outweighs the advantages. Use of a variety of bean / legume that doesn’t produce excessive vines. Smaller bean plants, bush beans should be placed in such a fashion so as to avoid being over-shaded by the cucumbers.

Radish – Radishes repel rust flies and cucumber beetles to some extent. Cucumbers and radishes both do best in full sun and well drained soil so there is no conflict in this issue.

“Sow two or three radishes among your cucumbers, and let them grow as long as they will, even blossoming and going to seed. You may trap cucumber beetles by filling shallow containers about three-quarters full of water into which some cooking oil has been poured.” Carrots Love Tomatoes- L.Riotte

Lettuce and Cucumber make a nice salad and they work together in the garden also. Cucumber plants are space-hogs, so try not to over shade the lettuce.

Onions, Garlic, and other Alliums serve cucumbers well as they repel many of the pests which infest cucumbers.