With over 1,000 different types of Cherries, selecting the perfect type for your yard or mini orchard can be complicated, – Ciest la vie, life is not a bowl of cherries. There’s varieties to suit differing needs and palettes. Bing seems to be the predominat variety for eating fresh, although fans of black cherries and ranier would beg to differ. Cherries grow best in temperate climates, and peak in the summer months. They are not by any means tropical and require cold stratification in order to germinate, some more than others. In addition to Bing [ Not Crosby or Google – but Bing ], which is the dominant commercial sweet cherry there also yellow cherries, dark red and black cherries, sour cherries.

Bing Cherries got their start as a crossbred graft from the Black Republican cherry by Oregon horticulturist Seth Lewelling who also developed the Black Republican variety. Lewellings friend and foreman was a Chineese immigrant named “Ah-Bing” for whom the Bing Cherry is named. Today, there are around 16 types of Bing cherries. Bing is used as a the standard of comparison for sweet cherries Ripening time for a variety is commonly referred to as being the time period before or after Bings ripening.

Bing cherries are used primarily for fresh eating. They are relatively large, dark and firm. One drawback is that they are prone to cracking if they receive too much rain or moisture close to harvest time. Dry-summer climate is best, not drought just dry. Zones 5 -8

Black Republican Cherry can be traced to Oregon of the 1860s. It was bred and named by Mr. Seth Lewelling a Civil Rights advocate and abolitionist, who named it ‘Republican’ due to his beliefs in Equal Rights. The fruit is smaller than most other cherries but is firm and tart. Once an important commercial variety that was surpassed by the Bing cherry. Today, like Black Republican people it is a rare but rewarding variety. Zone 5 4&6 Marginal

Black Tartarian Cherry is an heirloom sweet cherry from Tsarist Russia. In the early 1700s it was introduced into the U.K. and found its away acroos the Atlantic to North America by the late 1700s. It is popular with many home growers as it produces prolifically and has an appealing appearance. Fruit ripens in early summer. Zones 4 -7

Chelan Sweet Cherry has an upright growth habit, the tree does not fan out and occupy excessive space, similar to columnar trees. They mature early, an average of two weeks ahead of Bing cherries. Grown mostly in the Pacific Northwest Resistant to cracking. Zones 4-5

Chinook is a hybrid cross between ‘Bing’ and ‘Gil Peck. ‘It is similar to Bing but a tad sweeter. Often used as a pollinator for Bing Cherries. Ripens roughly a week earlier than bing. Not popular among commercial growers as it It has a fragile soft flesh and is prone to rain cracking. Zones 5-8

Coral Cherries are a pink cherry that produces prolifically in the summer. Cherry has a brilliant pinkish-red exterior and a light red or pinkish flesh. Very sweet. Corals’ ripen slightly more than a week earlier than Bing cherries. Prefers warmer climates. Not to be confused with Coral Champagne, a similar but different cultivar. Zones 6-8

Lambert cherries are usually available from midsummer until the start of August. large, firm with a deep cherry red color. They are tasty enough to eat off the tree but are used mostly in baking and preserves as they maintain their firmness even when cooked. 800 – 1000 chill hours. Zones 5-9

English Morello is a sour cherry used in pies and preserves. Dark deep red to almost black skin. Morellos get a tad sweeter as they mature. However, due to its acidity and sour / tart flavor, it is usually only pleasant to eat fresh Morello cherries when they are completely ripen, although who can say, taste is in the palette of the beholder – some people suck on raw lemons. Zones 4-9

Choke Cherry is not a true cherry but close. Also known as Aronia, choke berries and sometimes wild cherry, Like Cherries, they are related to roses. The chokeberry genus is actually 3 distinctly different, but related species. They are grown as ornamental plants as well as for food. The berries are more frequently processed in wines , jams, syrups and preserves but can also be eaten raw. Cold Hardy down to zone 2

Lapins – A cross between Stella cherries and Van cherries. Fruit reaches up to an inch in diameter. Cold hardy, dark, sweet. Ripens about two weeks after Bing cherry. Slightly crack resistant. Only 400 to 500 hours of winter chill is required making this suitable for growing further south than many other varieties. Zones 5-9

Napoleon is believed to have originated in Germany. It produces abundantly, however its biggest drawback is that its Disease resistance is poor. Light red Cherries are a wee bit larger and more acidic than standard varieties, the interior flesh inside is light yellow. Zones 5 – 9.

Rainier – Ripens mid-season with a yellow fruit bearing only a blush of cherries trademark red. Sweet flavor with only a hint of tartness. Ripen in late June and early July. Hardiness zones 5-8

Royal Ann is a yellow cherry similar in appearance to Ranier, but with a sweet-tart flavor. Good for fresh eating, better for baking and preserves. They do best in temperate climates with full sun. Zones 5-7

Tulare is similar to Bing but has a much longer storage time. Grown predominantly in California, they ripen about a week before Bing. Zones 5-8

Utah Giant Cherry is a large sweet cherry. Comparable to Bing so far as taste is concerned, some say its sweeter.

Van cherries are slightly smaller than Bing, with a deep black color,they are firm and sweet. They ripen in mid July to early August. Zones 5-9

Self Fertile cherry varieties do not need a pollenizer / pollinator, one tree is sufficient to produce fruit. Even though one tree will pollinate itself, a suitable related cultivar nearby will generally increase fruit yield and quality. Most Self-Fertile cherry Varieties were originally tart cherries aka sour cherries, with very few sweet varieties available. In the last few decades new Sweet varieties are being introduced that are self fertile. Sour Cherries, meanwhile aren’t unsuitable for fresh eating, also known as pie cherries, they are more suitable for baking and preserves . Many people prefer tart cherries even though they are not as sweet they have their own delectable qualities.

Benton is a self-fertile SWEET cherry tree, a cross between cross between ‘Stella’ and ‘Beaulieu. It is favored for it visual appeal in the landscape realm, but is by no mean lacking in edible qualities. It ripens mid-season, slightly earlier than Bing, with relatively large, bright red fruits. Also has a better disease resistance than Bing.Zones 5-8

Blackgold, a cross of Stark Gold and Stella, it is another Sweet cherry that is self fertile. It ripens late mid-season and has a higher frost tolerance than many of its cousins in the cherry family. Zones 6-9 Marginal in 5.

North Star is a tart [sour] dwarf variety suitable for cultivation in small yards and confined spaces. Fully Mature they reach about 12 feet tall. Cold hardy, pest and disease resistant. Fruit is suitable for eating fresh but as a sour / tart cherry is more commonly used for preserves and baking. North Star is self-fertile meaning you only need one plant to pollinate and produce fruit. Adding an additional pollinator will however increase your yield and quality. Zones 4-7

Cristobalina cherry is a European variety. Also known as heart of pigeon cherry. It has lower chill requirements than many other varieties. It’s a fairly small cherry which has excluded it from most commercial orchards, what it lacks in size it makes up for in productivity when properly maintained. It is self fertile and is suitable for backyard fruit growers. Zones 5-9

May Duke – Duke Cherries, are a cross between sour and sweet varieties. Dukes have lost favor in recent years as more self-pollinating sweet cherries have become available. They are still good pie cherries. May Duke is one of the oldest duke varieties, it was grown by Thomas Jefferson at his Monticello estate. May Duke produces large early crops of tart and tangy cherries suitable for eating fresh or preserves and baking. Zones 4-7

Santina, a cross between Summit and Stella is an early black cherry with a high sugar content. sweeter flavor than other black cherries. Zones 5-7. Self Fertile.

Skeena is a dark mahogany late-season sweet cherry, ripening up to 15 days after Bing. The fruits is large and very firm, with dark red flesh and dark red to black skin. High cracking resistance. Zones 5 – 10

Stella is is popular among breeders, and you will find Stella in the lineage of many hybrid cherry varieties. Zones 5 – 8, not cold or frost tolerant.

Sunburst is very productive with large, firm fruit. It needs in the vicinity of 800 hours of chill time. Zones 5 -9.

Vandalay, a cross between Van and Stella it is a large, wine colored sweet cherry. Ripens Mid Summer. Zones 5-9. Vandalay is self-fruitful, but does not produce well by itself. With a suitable pollinator such as Stella, Van, Vista, Napoleon or Bing it produces more prolific higher quality fruit.

Whitegold is a rare variety of sweet cherry. It is a cross of Emperor Francis and Stella. It has multiple disease resistance traits and also resists cracking. Available as standard, semi-dwarf and dwarf. Zones 5 – 7, marginal in zone 4. Self Fertile. 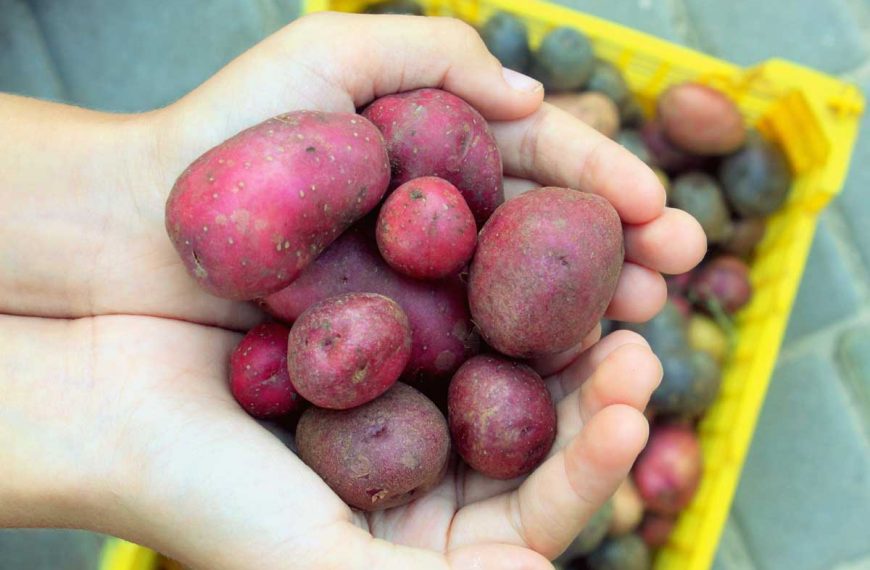 25 Melon Varieties to Try out