Sweet and succulent taste smooth creamy texture. The water content inside Apollo melon is abundant. Can’t say why this cultivar is not popular but it’s fairly easy to grow and worth trying.

A hard to locate melon. Sweet watery taste and texture. Round melon weighing around 2.5 to 4 lbs. The Rind is golden yellow and the flesh is yellowed white.

Babaco Melon is believed to be a naturally occurring hybrid of Papaya. It is native to Ecuador, Chile and Peru where it grows in clusters on the babaco tree stems. The tree reproduces via shoots which take slightly over a year to mature and produce fruits. The Fruits are elongated, 8 to 12 inches long like a cucumber, but star shaped. Sliced crosswise, they have a pentagon shape. When ripe it is yellow like a banana and tastes sweet like a cross between strawberry and Papaya, some say pineapple and banana. It will continue ripening when removed from the tree.

Bitter melons aka bitter gourd or karela in India, are curcubits, related to cucumber, squash, cantaloupe and other melons. They have been popular in Asian cuisine for centuries. Varieties differ widely both in overall appearance and shape as well as in taste. As the melons mature, instead of concentrating sugars as many edible fruits and vegetables do – they concentrate bitterness and taste horrible. The fruit is commonly eaten green, just prior to its turning yellow.

Canary melons are yellow elongated melons, the flesh is reminiscent of honeydew in coloration and texture. The taste is sweet, also similar to honeydew but a tad more tart and tangy. There are various varieties but most are predominantly elongated and canary yellow.

Cantaloupe sometimes spelled cantaloupe aka Muskmelon. Cantaloupes are Cucurbits along with watermelons, squash and cucumbers. Like all melons, cantaloupes grow best in sandy, well-aerated, well-watered soil that is free of encroaching weeds.

Cassabanana Melons is up to 2 feet in length with a hard fiery magenta rind. They are perennial vining melons that under the proper conditions can reach 40 to 50 feet in length [The plant, not the melon]. The sweet flesh is varying shades of yellow and orange and surrounds a core of large flat brown seeds which run the length of the melon. The fruit is sweetly aromatic even before being cut.

One of the sweetest of all melons. Crenshaw is a hybrid cross between Casaba and Persian melons. Grows best in warm, dry climates. Melons are oblong / green and yellow exterior with salmon pink flesh.

Mexican Mini Watermelons are the size of grapes, look like miniature watermelons but taste like cucumbers and lime – Pickles that have never seen the brine.

They are more closely related to the cucumber than watermelon. They are a central American heirloom delicacy that’s been eaten in Mexico since pre-Colombian times. They are pretty much pest free, drought resistant and relatively easy to grow.

Gac sounds like something a Klingon would eat but it’s a tasty sweet melons. There’s a thin line between cucmbers and melons, they are closely related to one another. Gac is considered a cucucmber by some and a melon by others.

There are two varieties of ‘Gak’ cucumber. One is 1.5 inches to slightly over 2 inches in length the other is slightly larger reaching just shy of 4 inches in length. It has a very unusual and unique taste with hints of cantaloupe and carrots Hmmm.

Honeydew is Honeydew what more can be said ? Well known and popular for good reasons. There are many varieties of honeydew all have a fragrant and sweet aroma and taste. In the Honeydew klan there is Standard Honeydew, Orange-Fleshed varieties that resemble canteloupe, some rare and exotic types, hybrids and of course good old heirlooms.

Jelly Melon fruit tastes like a blend of cucumbers and pomegranate, some people say they taste similar to kiwi and bananas- one thing is certain, it don’t taste like chicken. It has a distinctive oval shape and orange-yellow spiny skin with a green jelly flesh and a lot of seeds.

An unusual and until fairly recently unheard of melon has come out of punjab province in India. It is a colorful and tasty Asian Heirloom that was close to extinction at one time.

The taste is similar to honeydew but not quite as sweet it has a hint of green apple flavor. They weigh between 1.5 and 2.5 lbs on the average

The Korean melon is about 6 inches long and weighs around a pound. It’s flesh is white, succulent, juicy and sweet. It exterior is yellow, although some of color variations exist, it has white stripes that run the length of the melon. The flavor is similar to hooneydew with a more earthy flavor.

The pepino melon is not a true melon, it is actually a Solanaceous related to eggplant and tomatoes. It has greenish yellow skin with purple stripes running vertically. The aromatic flesh is yellow and slightly grainy. All parts of the pepino melon are edible. The taste is somewhat like cantaloupe with a hint of pear. If harvested under ripe it tastes a tad bland.

The Santa Claus melon, aka Christmas melon is very similar to honeydew in taste. In appearances it differs quite a bit. It has a thick, green variegated outer rind and greenish to white flesh. A hardy melon that can be kept 4 to 6 weeks longer than other melons.

Sky Rocket Melon looks like a cantaloupe on the outside but a honeydew on the inside. Sweet and slightly fibrous yellowish white flesh.

The Sprite melon is similar to honeydew. It is rounded and about the size of a grapefruit weighing in at up to 1.5 lbs. The exterior is a creamy white to ivory and the flesh is a paler shade of the skin. It is incredibly sweet, pleasantly so, and tastes like a blend of honey dew and over ripe pears. Sprite Melons have about 25% more concentrated sugars than other melons.

Perhaps the most expensive melon in the world. White and yellow exterior when fully ripe, slightly webbed skin. The flesh is fragrant with a pleasant taste.

Tiger Melon, aka Tigger Melon, an heirloom melon, similar to honey Dew in taste, also related to canary melons. Yellow and orange tiger stripes are believed to be its name source. The plants are reminiscent of other melons such as muskmelon or cantaloupe, but the fruit ripens later in the growing season than related varieties, it can be grown right up to early Autumn. It is also more drought tolerant than most other melons. From seed planting to harvest is about 4 months.

Valencia Melon, sometimes referred to as Green Valencia or Valencia Winter Melon. It is called ‘winter’ melon not because you can grow it in the winter, but because it stores exceptionally well – nearly all winter long. It is a very old heirloom of uncertain origins, possibly Italy. Valencia is listed in North American seed catalogs of the early 19th Century, it disappeared from the radar screens until relatively recently.

Vert Grimpant is a French heirloom. A vining melon that is generally grown on a trellis. The melons themselves are relatively small as melons go, only weighing 1 – 2 lbs each. They are slightly oval and about the size of grapefruit. The flesh is a tad crisper than softer cantaloupe and honey dew but still manages to hold a juicy sweetness. Not as sweet as some of its melon cousins but still sweet when picked at the correct level of ripeness.

Contrary to what its name suggests, Winter Melon does not grow in the Winter Time. Its growing season is more in line with that of Pumpkins. It acquired the name Winter Melon due to its excellent storage qualities. It can be stored for up to a year when mature. It is not a fruit and it’s taste, although it is related to melons, is more vegetable like – not as sweet as honeydew or cantaloupe, it is mildly sweet. It can be eaten raw, but is most commonly used in stews and soups where it adapts to the taste of what it is cooked with.

Good Old Watermelon need no introduction, it is the most commonly known of all melons. There are hundreds of varieties and variations such you may want to shop around to see which ones suit your needs and desires. 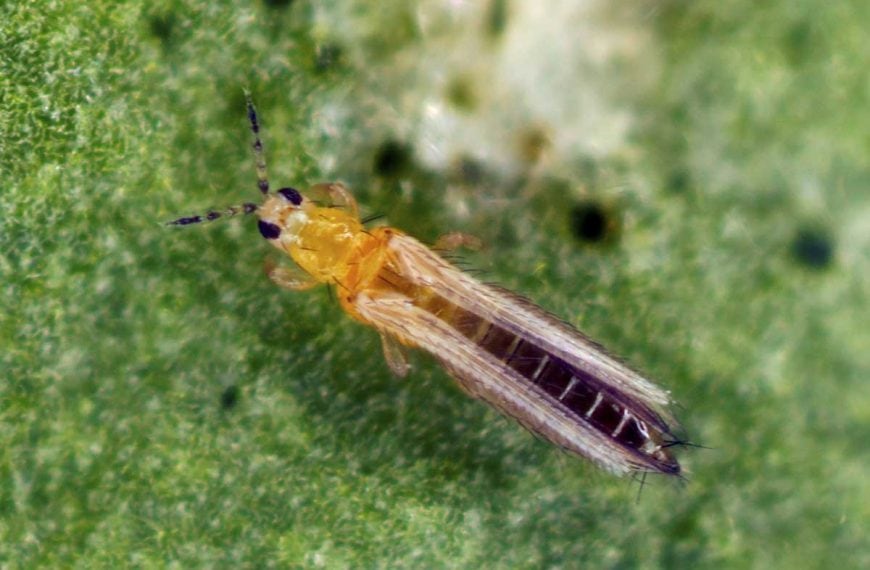 How to Identify and Control Thrips