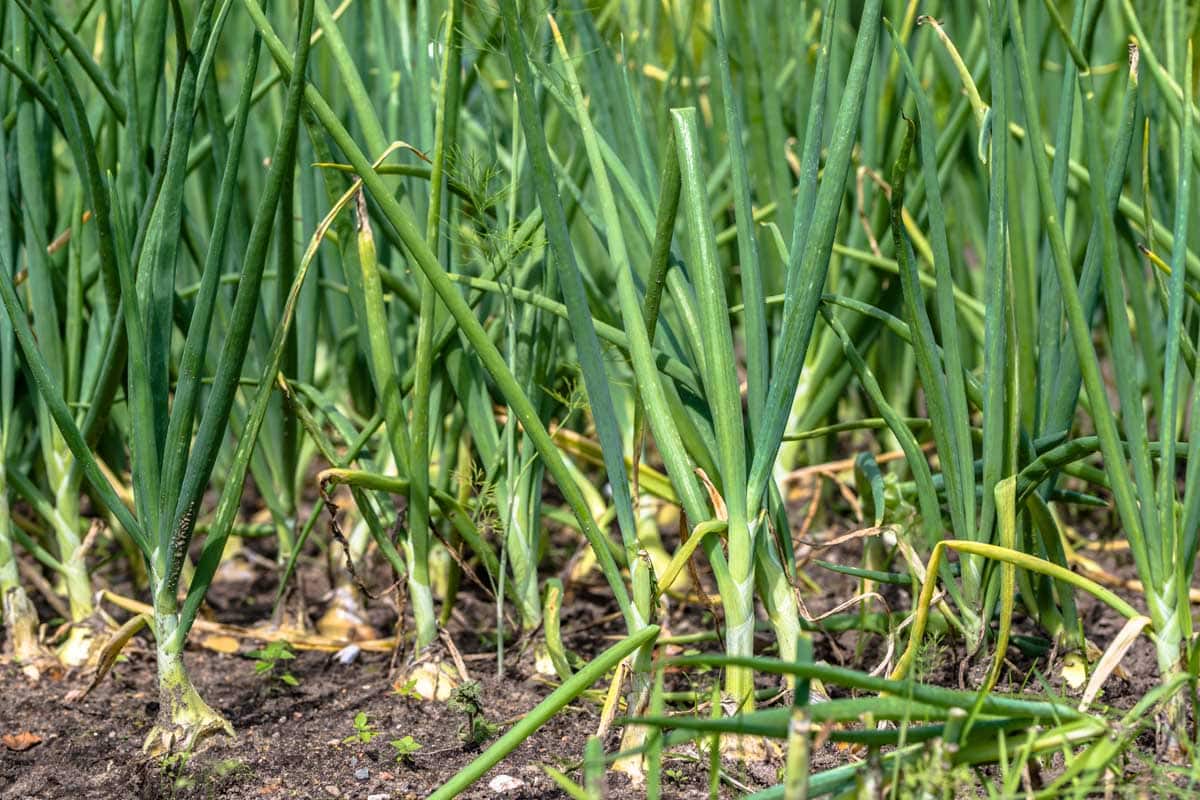 Companion Planting is the growing together of all those elements and beings that encourage life and growth; the creation of a microcosm that includes vegetables, fruits, trees, bushes, wheat, flowers, weeds, birds, soil, microorganisms, water, nutrients, insects, toads, spiders, and chickens.” – John Jeavons, How to Grow More Vegetables Than You Ever Thought Possible

Some other good plants to with Onions are Beets, Cabbage, Celery, Lettuce, Pepper, Squash, and Strawberries.

Do not plant onions or other alliums in the same soil for more than one season.

Rotate the crops to various sections of your garden space from season to season. It’s also a wise idea to scatter your onion plants throughout the garden, near compatible plants.

Onion maggots and root maggots will migrate from one plant to another when they are planted in tight rows.

Alliums are a family of plants which include onions, garlic, leeks, shallots, chives.

Beets grow well with onions, they are compatible. They draw from different levels in the soil, so do not have to compete for nutrients. Some varieties of Onions and related alliums such as garlic help to suppress many fungal related plant diseases that afflict beets.

Onions repel or deter insect pests that favor leafy crops such as cabbage. Onions and other alliums emit a scent that acts as a repellent. They also mask the odor of other crops, confusing pests and keeping them uninterested.

Onions all emit a pungent aroma that repels many insects. Garlic, a related crop, also releases sulfur into the soil that is beneficial to Tomatoes and detrimental to soil-borne pathogens. Onions and alliums will repel nearly all varieties of aphids.

Carrots are an ideal candidate for inter-planting with onions, particularly for the purpose of pest suppression.“Protect carrots by planting them with leeks to repel both carrot and onion flies. They won’t even lay their eggs and your yield will increase tremendously.” {Natural News May 2012]

“A major enemy of the carrot is the carrot fly, whereas the leek suffers from the leek moth and the onion fly. Yet when the leek and the carrot live in companionship, the strong and strangely different smell of the partner plant repels the insects so well that they do not even attempt to lay their eggs on the neighbor plant. This is why mixed plantings give better insect control than a monoculture where many plants of the same type are planted together in row after row.” Carrots Love Tomatoes: Secrets of Companion Planting for Successful Gardening

Celery and Parsley also grow well with Onions for the same reason as Carrots. Celery is related to Carrots and has many of the same pests – Onions and other Alliums will help to suppress these pests the same as in carrots.

“The compatibility of celery and leek, for instance, consists in the upright nature of the leek thus finding room near the bushy celery plant, and both are potash lovers.” God’s Garden, My Life

Chamomile resembles a daisy, it enhances onions and other aromatic plants. It has been documented to cause neighboring plants to increase oil production, particularly mint, but alliums as well.

The mechanism behind this is not fully understood but the flavor enhancement derived from it is documented.

There are two plants known as chamomile and they are not the same plant. Roman and German Chamomile. The Roman is sometimes referred to as English or Russian Chamomile.

In addition to its enhancement properties, it also has an aromatic insect repellent attribute as its strong scent deters some pests.

What Herb Is That?: How to Grow and Use the Culinary Herbs

Onions grown with cucumber has been demonstrated to significantly reduce the incidence of plant disease. powdery mildew, pre- and post-emergence damping-off and other fungal issues. [2]

Onions repel or deter insect pests that favor leafy crops such as lettuce. Onions and other alliums emit a scent that acts as a repellent.

Onions also mask the odor of other crops, confusing pests and keeping them uninterested.

Peppers have some insect repellent attributes, and they have no antagonistic interactions with Onions or other alliums.

There are some claims of flavor enhancement with hot peppers and alliums which seems feasible considering the sulfur content of many onion family plants. I personally have tried this combination and didn’t detect it, but there are many varieties of both families of plants – perhaps a different combination.

Beans and legumes are not good companions for any Onion Family plants. It has been documented that onions stunt the growth of beans, legumes, peas etc.

All onion family plants exude a compound that inhibits growth in beans and legumes. A compound found in garlic and to a lesser extent leeks are known as “ajoene” acts as an anti-fungal agent in some cases, but has a negative effect in others, the growth of beans and legumes being one. *[1]

Turnips, when grown for the root and not the greens, are adversely affected by being planted near alliums. Growth is purportedly stunted and flavor most definitely depreciates.

It’s been said and repeated that sage is harmful to Onions. This is apparently a claim based on observations from generations of gardeners and farmers, there does not appear to be any scholarly data to back it up. Many of the “hunches” of old farmers and gardeners have panned out, and I would not suggest planting sage and onions together with so many other options available.

2. Effect of Garlic and Onion Extracts or their Intercropping on Suppressing Damping-off and Powdery Mildew Diseases and Growth Characteristics of Cucumber

Growing Ground Cherries by the Bushel