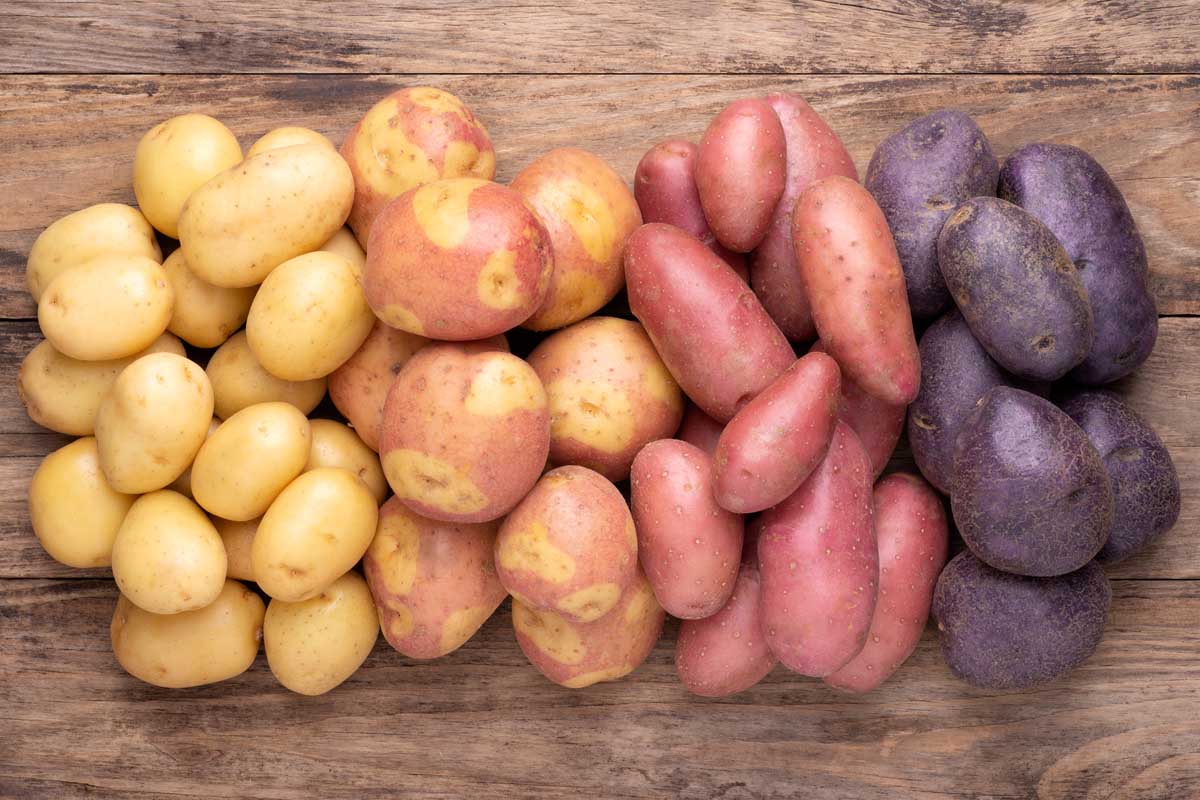 There are over 4,000 varieties of potatoes.
Many are highly specialized, novelty, heirloom, hybrid and even wild potato varieties.

They can all be categorized in 8 Different types.

Idaho Potatoes aka Russets are a fairly commonly grown spud in North America. They generally have a hallmark elliptical shape with a “russeted” rough brown skin. Russets have a low moisture and high starch content which make them ideal for mashing and baking. They are also popular for deep frying aka French fries.

Red Potatoes have less starch but more natural sugars which creates a slightly different taste as well as texture. The flesh of red potato tubers tends to be a tad more waxy than other varieties, which helps it stay firmer when cooked, basically they hold together better.

Their red skin is also generally thinner than standard varieties, you can actually scrub it off if you wash it too vigorously. The thin red skin lends itself well to some culinary endeavors and adds an aesthetic appeal to others.

Yellow-fleshed varieties of potatoes not only have a rich buttery color, they are flavorful, creamy and moist in texture, without having to add butter or sauces.

Blue Potatoes originated in South America where they are used in collaboration with native herbs and spices to make potato cakes, tortillas and colorful salads. They are sometimes dried and also used just as they are.

All potatoes provide substantial amounts of nutrients, blue and purple potatoes also provide carotenoids and flavanoids not found in standar white potatoes. The flavanoids and carotenoids are pigmentation but also provide multiple health benefits. In addition to cancer protection and weight loss – Research conducted at the University of Scranton,PA showed that purple potatoes help to lower blood pressure, without causing weight gain.

Fingerling Potatoes are tiny taters, generally 2 to 3 inches long, but sometimes and in certain cultivars they are at time substantially longer. The relatively long tubers makes them resemble dangling fingers, hence the accolade “Fingerling”.

Many fingerling potatoes also belong to other categories such as yellows, blues and reds.

Petite potatoes, like fingerlings are tiny taters but unlike fingerlings retain their round and or oval shape characteristic of the potato tuber. They are sometimes compared to marbles and gumballs so far as their size is concerned. The flavor varies slightly from the larger potatoes having a higher skin to flesh ratio contributes to a concentration of certain compounds, sugars and starches.

Most potatoes sold as “petite” are actually immature potatoes of other varieties that have been harvested before full maturity. They are frequently referred to as Baby, Creamer or New Potatoes. They are best boiled, steamed, or roasted to allow the skins to add a colorfully complimentary aesthetic appeal to many dishes. Leaving the skin on also enhances the nutritional value.

Sweet potatoes are not really potatoes. Potatoes are nightshades related to tomatoes and peppers from a botanical point of view, while Sweet potatoes are related to morning glory family which comprises over 1,000 species of flowering plants. The sweet potato tubers are moister and have a higher sugar content , they are sweeter and tend to be thinner skinned than yams and the end in generally pointed / tapered.

Like Sweet Potatoes, Yams are not related to potatoes, they are related to lilies. Like sweet potatoes they can be orange or even purple, some varieties are white. See: Sweet Potato vs. Yam

There are dozens of diverse Sweet Potato / Yam varieties each with its own characteristics. They differ not only in appearance, but growth habits and flavor as well. Colors run from standard orange to pinks and brimstone red.

White Potatoes are the bulk of the Potato Realm, they are the standard meat and potato spud they we are all accustomed to.

They typically have smoother skins in comparison to Russets or Idaho potatoes. They of course are not as sweet as Sweet Potatoes or as creamy as wax potatoes such as Yukon Gold. White potatoes are creamy when baked and smooth when mashed.

Long white potatoes have an elliptical shape and a thin tan to gray-brown skin with minute eyes. Long whites grow up to 6 inches long and about 2 inches in circumference. Round Whites have basically the same coloration and texture as longs but are more spherically shaped.