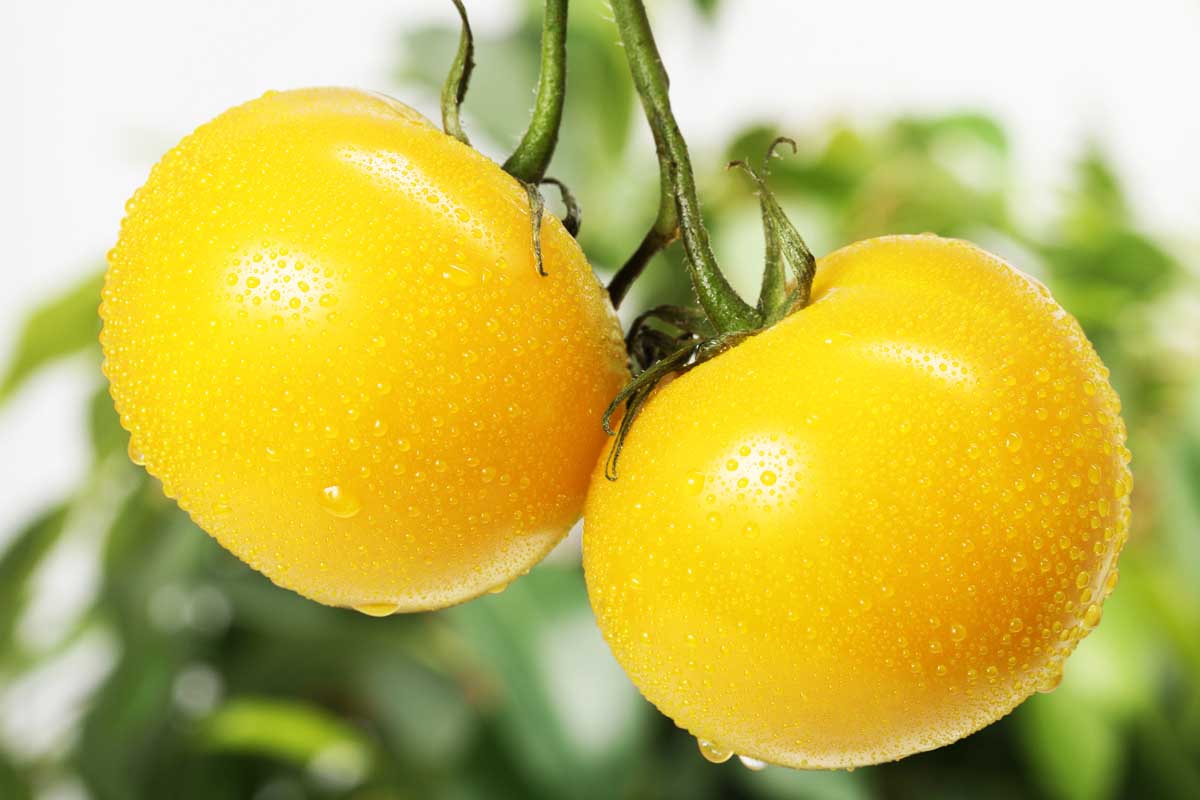 Yellow tomatoes are bred to be yellow, there are a rare handful of culivars that are yellow and assorted hues that vary from the traditional red and orange tomato which are ancient,and reintroduced recently as novelties for the gardening and culinary realms but these are a rare exception, nearly all are the product of selective breeding.

The color difference so far as tomatoes is concerned is more than just skin deep. Their nutritional value differs slightly from that of red tomatoes. Yellow tomatoes are less acidic than tradional ones, they have more niacin and folate, but less lycopene and vitamin C.

The lower acidity of yellow tomatoes is advantageous in some cases. For culinary purposes it allows more of the tomatoey sweetness and less tartness to be picked up by the palette. They are more readily digested by people who have an intolerance to acidic foods or stomach disorders.

Yellow tomatoes range in color from a pumpkin orange to pale greens and yellowish white.

Sizes range from miniature currant sized tomatoes such as yellow currant to Beefsteak varieties such as Hawaiian Pineapple Tomato.

So far as raising Yellow Tomato Plants, they do not require any different care than standard tomato varieties. See – How to Grow Tomatoes

Of course each individual cultivar may have some unique characteristics – some need to be trellised or staked – others don’t , some will do well in containers – others won’t, Some produce just dandy in the shade while others require full sun and so on.

Generally – Yellow tomatoes tend to be sweeter than red, blue or black tomatoes. Many people believe that yellow tomatoes, such as Gold Nugget or Basinga are lower in acid than standard tomato varieties, and that this contributes to their frequently characteristically milder sweeter taste. This is not actually 100% true.

Yellow tomatoes do not have significantly less acid than red tomatoes, but they taste sweeter because they have a higher sugar content.

The sugar acid balance in a tomato, which in effect is the flavor is not only derived from its genetic composition – plant chemistry and environmental factors such as sun, humidity, soil type and so forth also play a major role.

Gold Nugget Cherry Tomato is an early producer of an abundance of yellowish-gold colored marble sized tomatoes. A problem for seed savers in that it produces very few seeds, this attribute adds to its desirability in the culinary realm.

Yellow Currant Tomatoes have abundant small leafed foliage and produce grape like clusters of currant / marble sized tomatoes. Strong and tart but undeniably tomatoey taste. Good for salads and garnishes. I dry some that I grow and use them like sun dried tomatoes during the off season.

Lemon Drop Cherry Tomato These tiny Tomatoes chime in at 1/2 to 3/4 inches round and are are a vibrant translucent greenish- yellow. Refreshing sweet tartness, not bitter. This indeterminate will produce right up till the first frost.

Banana Legs Tomato are a moderately prolific novelty tomato, with 4″ long yellow fruits that ripen to a golden yellow with distinctive pale green stripes. They are similar to plum tomatoes, not really banana shaped as the name suggests.

Cream Sausage Tomato – Highly Productive tomato plant produces an abundance of creamy yellow plum / paste tomatoes. Unlike most other bush varieties, staking is sometimes necessary on a healthy cream sausage tomato plant due to the shear volume of its yield.

Wonder Light has a weak stem and needs to be supported.

Powers Heirloom Tomato is an heirloom tomato originating in Virginia in the early 1800s. 3 to 5 oz. Tomatoes are a pale yellow and relatively juicy and sweet. Good for canning, preserving, as a paste tomato, fresh by itself or in salads. Other than its yellow coloring, Powers Heirloom is very similar to Amish Paste Tomato.

Azoychka Heirloom Tomato – A highly dependable and productive heirloom tomato from Russia. It first became available in North America circa 1995. Azoychka can produce 40-50 tomatoes per plant. The fruits are a peach colored yellow orange, approximately 3 inches round with a sweet flavor and a hint of citrus.

Basinga tomato is an Old heirloom of uncertain origins. It produces average 6 – 8 oz pale lemon colored fruits with a tinge of pink near the blossom end. On rare occasions that tomatoes have been recorded as being up to a pound. It is a beefsteak style tomato that is 3 – 4 inches round and somewhat heart shaped. The flavor is sweet and relatively mild, sometimes a tad tangy.

Brandywine Yellow Tomato – There are several varieties known as brandywine. There are determinate and indeterminate, yellow, pink and orange versions.

Brandywine Yellow is actually an indeterminate that takes a tad longer than most other Tomatoes to set fruit and ripen, but the quality and taste makes the wait worth while.

Garden Peach Tomatoes were originally grown in South America – [Peru, Columbia and Ecuador] where they are known as Coconas. It’s a relatively small globe shaped, bright yellow peach toned fruit. When ripe it has a pinkish tinge which enhances the tomatoes peach coloring. It is also produces a fuzz – quite similar to peach fuzz and has a slightly fruity flavor.

If I didn’t know better I would say it’s a cross between a peach and a Tomato – but of course that’s impossible.

Green Zebra – This fairly modern heirloom has an unusual lime green and golden yellow stripes, flesh is a meaty bright green. Taste is sharp and a tad spicy for a fresh tomato. Has become popular among culinary artists, specialty markets and home chefs as well.

Hawaiian Pineapple Tomato is a bi-color heirloom beefsteak style tomato. It has an orange – yellow -red mottled skin and flesh. The plant produces average one pound fruits sometimes a tad smaller some a bit larger.

Pink Grapefruit Tomatoes are not really pink, when cut open the interior flesh has a slightly pink tinge, but its skin is a deep yellow. It doesn’t have a grapefruit taste either, although it’s acidic content does contribute to a citrus assault on the palette. The round smooth skinned fruits grow either singularly or in pairs

Dr. Wyche’s Yellow Heirloom Tomato were developed by a Dr. John Wyche, whose close friend owned the Cole Brothers Circus and gave him a lot of crap, elephant manure that is. Which the good doctor used to fertilize his gardens. He is also said to have used the manure of predatory animals such as lions which he claimed served to deter rabbits and other scavengers.

The Manyel Tomato is an heirloom tomato whose name is believed to come from a native American name for many moons – alluding to the many moons or yellow tomatoes found within the foliage of this plant. The fruits resemble yellow moons, they are a creamy yellow and have a sweet citrus flavor coupled with the distinct taste of a fresh tomato.

They are relatively thin-walled and subject to cracking, the 2 – 3 ” round tomatoes weigh about 10 – 14 oz. and grow in small clusters.