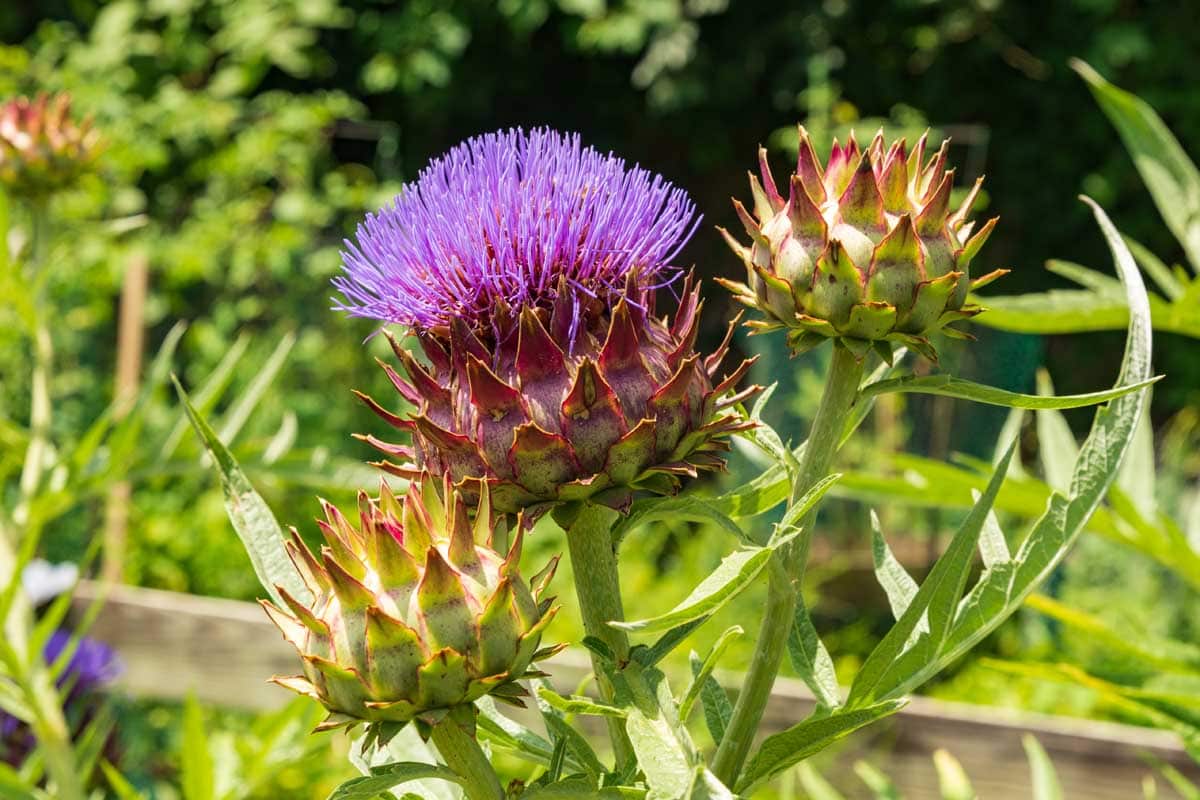 Cardoon aka artichoke thistle is similar to Globe Artichoke , but in the sunflower family as is sunchoke aka Jerusalem Artichoke. It was domesticated in the Mediterranean in antiquity and is still grown there as a viable food source.

The stalks are coated with tiny spines that are a tad bothersome and painful if they get lodged in your skin. There are however several spineless hybrid varieties.

Cardoon is a perennial that can grown as such, but can also be grown as an annual in some regions. It requires a mildly cool, not cold – just cool climate and a growing season of about five months. As stated avoid Cold weather – it is not frost tolerant.

The flower buds and stems are both edible, but the buds are most commonly sought after. They are prepared and eaten in the same fashion as globe artichoke. Of the stalk – only those that have been shaded should be eaten, they are the inner pale stalks. In order to obtain a greater quantity of edible stalks it is necessary to shade them as much as possible.

Shoring up dirt against the stalks but not the foliage is one way. Another method would be to wrap the stalks in black plastic. Once they are exposed to sunlight for any length of time they are no longer palatable until blanched again from the sun. The buds can be prepared in the same manner as artichoke.

Starting Cardoon from seed is feasible, starting indoors for later transplant outside should commence 4 -6 weeks before the final frost date, transplant outside after hardening 3 to 4 weeks after the average last frost date in spring. If all goes well, it will be ready for harvest in roughly 120 – 140 days.

Evenly water allowing plants to dry out between watering. Water the ground and not so much the foliage.

Fertilizer – Cardoon has a high nutrient requirent when developing, fish emulsion bone meal and blood meal are helpful as are compost and well rotted manure which should be amended into the soil pre-planting. Side dress with a high nitrogen fertilizer.

Cardoon is at times targeted by aphids, spider mites and whiteflies if grown in a greenhouse. Artichoke Plume Moth will feed on Cardoon, but is rarely a major problem. Slugs have been reported to feed on the spineless varieties.

Harvest Cardoon buds before they reach full maturity for the best flavor. Harvest the stalks after blanching for at least a month. Blanching in this case is blocking out sunlight as described earlier, you’ll also want to ‘blanch’ it in boiling water before eating it. Cut stalks off at ground level and trim away the leaves.

Cardoon stalks can be kept in the refrigerator for up to 2 weeks. It can also be frozen, canned, or dried. The stalks should be treated in the same fashion as celery.