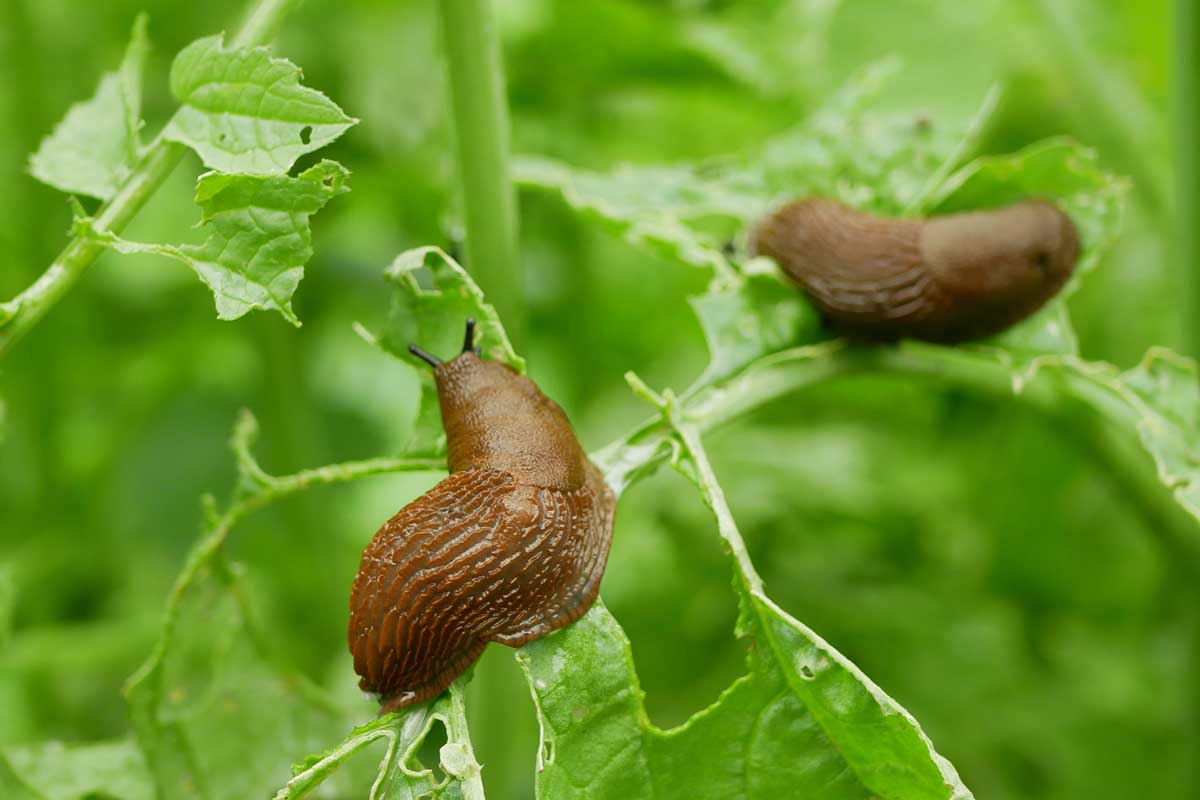 Snails and slugs have been a nuisance for Gardeners since humans first abandoned the hunter gatherer stage and began farming. Many methods have been used at various times and places to control snails and slugs, some methods work, some don’t.

They like to feed on young seedlings and succulent parts of plants. They leave a trail of mucus on the surfaces on which they crawl. Moist, humid environments favor slug development, and slugs usually overwinter in sheltered locations outdoors.

They move by gliding along on a muscular underside muscle which constantly secretes mucus. This mucus later dries to form the silvery “slime trail” that signals the presence of either pest.  Snails and slugs are most active at night and on overcast days. They seek shelter from sunlight and heat of day.

They may lay eggs up to six times a year. It takes about 2 years for snails to mature. Slugs reach maturity after about 3 to 6 months, depending on species, and lay clear oval to round eggs in batches of up to 40 in protected areas.

Snails and slugs feed on a variety of live and decaying plant matter. On plants they chew irregular holes with smooth edges in leaves and flowers and can clip succulent plant parts.

They have also been known chew fruit and berries. They are notorious pests of seedlings and of ripening fruits, particularly those growing close to the ground.

This method is self explanatory, to lure and trap the snails and slugs. Lure them out of garden areas and into an attractive environment. Several cost effective methods work to varying degrees in different situations.

You can use an upside down container such as a flower pot . Prop one side of it up slightly – snails and slugs seek out shade, in the morning you’ll probably find some under here to dispose of in whatever way you choose.

When I was a kid I liked to pour salt on them and watch them melt, but as a ‘somewhat mature adult’  I found this a tad sadistic.

Making a sun shelter out of cabbage leaves or various citrus rinds also works in the same fashion, if not better as they are attracted not only to the shade but to the scent of the food.

There’s usually no stale beer at my house , it rarely has time to get stale. However, in the gardening season I from time to time sacrifice to the garden gnomes a can or two of Coors.

Be sure to use a deep enough trap so that slugs can’t reach over the top to get out, but are able to crawl in just fine. A deep cup set into the ground should suffice for slugs, for snails this is not as much of an issue as they are not as agile.

If using the Yeast and Honey mix they tend to get stuck in the gluey concoction, if using the beer my guess is they get crocked and don’t know what’s happening to them anyway.  Frogs sometimes get trapped in these mixtures also, if you find one still alive, I would suggest releasing him as he’s one of the good guys of the garden realm.

To make the yeast and honey mixture boil some yeast and honey in a small amount of water. You want most but not all of the water to evaporate in the boiling process to leave the mixture with a liquid gluey texture that is more difficult for the slimy victims to escape from.

Some gardeners use Dog food or Cat food to attract and trap snail and slugs, I don’t, and I don’t recommend it. If you don’t have a rodent, raccoon, or varmint problem when you begin this practice you probably will once it gets going.  It’s a definite no-no.

When snails and slugs come into contact with copper a chemical reaction is triggered, same principal as a battery. The snails or slugs get a slight non fatal electrical shock and back off. It’s a deterrent only, and useful in protecting plants you are particularly fond of.

Copper barriers are practical for keeping snails and slugs out of Cold Framesor raised beds, containers, or as a border around prized smaller trees. Conductive adhesive copper foil tape is the most cost effective item to use in this scheme. The copper strip should be wide enough so that snails or slugs can’t raise their bodies over and past it.

Most copper stripping is not wide enough to create an effective barrier, so you would have to use multiple strips. Leaving a minute space between strips is fine as snails and slugs are pretty much guaranteed not to be smart enough to figure this out and their slimy bodies will most certainly come into contact with enough surface area to generate the desired shock.

The copper should be cleaned periodically  to minimize oxidation and normal dust and residue, vinegar will suffice.

Copper screening or flashing will work even better if you happen to have some around, personally I wouldn’t spend the money on it – but I’m a frugal [polite word for cheap] kinda gardener.

Diatomaceous earth also works well as a barrier. This method won’t kill the snails and slugs, only deter them. Fine sandpaper also works but I’ve personally found it to be a nuisance in the outdoor garden as it needs to be anchored down.

Snails and slugs have many natural enemies, including ground beetles, snakes, toads, turtles, and birds. Poultry such as chickens and ducks will generally snack on any passing snail or slug they see. This is generally only feasible in rural setting.

Decollate snails are somewhat effective in controlling common garden slugs. Decollate snails will feed on young snails, but they are omnivorous and will also eat your plants just like any other snail.

These snails are semi-tropical and don’t thrive in low temperatures , and are banned as potentially invasive species in some places.  If you are going to use Decollate snails, do not use any kind of snail bait, organic or otherwise.

The best organic snail and slug bait products is Sluggo which contains iron phosphate. It is safe to use around pets, humans,  birds, beneficial insects, and other mammals

You can safely use sluggo around edible food crops, greenhouses, and landscape plants. Iron phosphate used in Sluggo is an organic compound found naturally in the soil, and if the bait is not consumed it breaks down in the soil and becomes fertilizer.

It is applied to the soil as a pellet or powder which also contains a bait that attracts snails and slugs. When the slime balls ingest iron phosphate it interferes with their metabolism, causing the snails and slugs to immediately loose their voracious appetites, they stop eating get anorexic and die within a week.

The best time to apply Sluggo for long-term control is in the autumn, preferably in damper weather. Come spring, there will be few adult slugs and snails laying eggs. Another application in very early spring when the hatchlings are emerging, and then again when the leaves are all greening and you shouldn’t have any slug or snail problem for the rest of the year.

Don’t use Sluggo if your are using predatory, snail-eating, decollate snails.

Metaldehyde is a similar product to iron phosphate, but is not as effective as it stops working once it gets wet, rain or watering the garden, whereas iron phosphate remains active after repeated soakings, for up to 2 weeks.

Metaldehyde baits can be dangerous around pets as it looks like food to them. Metaldehyde based products however are generally less expensive than Sluggo.

A vinegar water mix or just straight vinegar will kill snails and slugs but must be sprayed directly on them. It works in the same way as salt does. Vinegar is an acid and dissolves the mucus soaked slime blobs we call snails and slugs. Put salt on a slug and the same thing happens.

Diluted household ammonia will work in the same fashion as the vinegar mix mentioned above. Ammonia in moderate quantities won’t hurt the plants and may actually help them as it is almost pure nitrogen which plants love. 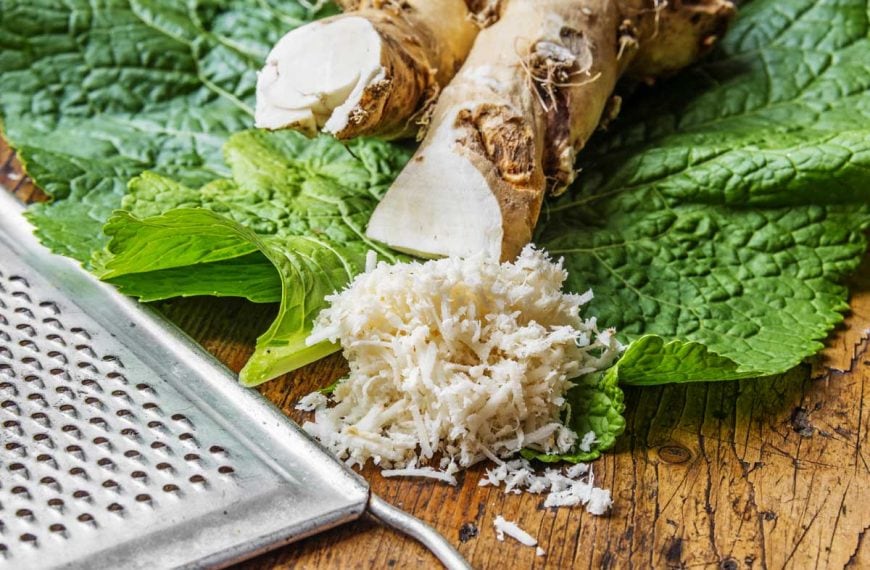 How to Prepare and Preserve Horseradish After Harvest