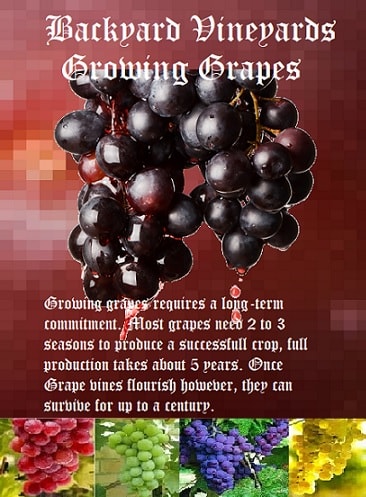 Growing good grapes requires a long-term commitment. Most varieties require 2 -3 seasons from the first planting to a successfully harvested crop, and generally will not reach full production for about 5 years. Once Grape vines flourish however, they can survive for up to a century, provided they are properly cared for. Hope you don’t plan on dieing in the next 100 years or so, because your grape vines are gonna need you !

Site selection is vital in establishing either a vineyard or just a few vines for personal consumption.

It is preferable to plant in a row that goes in a north south direction, rather than an east-west direction. They will receive more exposure to sunlight than in an east west row.

You should always expose as many leaves to full sunlight as possible ,This helps to ensure optimum photosynthesis, as well as pest and disease control . Sites that are on sloping highs may require contour planting or straight rows across the slope at expense of the North – South factor. If you are only planting 2 or 3 vines the compass orientation is not really a factor.

Training and pruning of grapevines to achieve a healthy plant and Hearty harvest are vital. For optimal productivity, they should be trained to a definite system and pruned frequently.

There are several training/trellising systems used. The two most common, and the suggested methods for home growers are the Vertical Trellis and the Overhead Arbor – Both are satisfactory for a home planting scheme if kept well pruned.

If a landscaped appearance is not an issue, a simple vertical trellis made of fence posts and wire should suffice. Drive fence posts into the ground – steel , wood, plastic .. – at the desired location. You may want to place the posts in concrete if planning for the long term. String wires between the posts, being sure to leave adequate space for airflow and light penetration. Leave a small amount of play in the wire, they shouldn’t be stretched taught, nor so loose that the vines will drag them down.

Arbors in home gardens are generally frame structures which are relatively simple to construct. Build a basic framework and affix latticework to one or more of the sides. Train grapevines to climb up and over the latticework . Eventually the foliage will thicken, providing shelter on hot, sunny days. Just watch for Bees.

Pruning should be done when the vines are dormant.

Where there is danger of winter injury, pruning can be delayed until very early spring.

Soil pH is referred to as the acidity of the soil and is measured by the number of Hydrogen ions present in the soil solution.

When the soil pH is too acidic (low pH) or alkaline (high pH), nutrients present in the soil become locked-up or unavailable. Correcting the pH has the same effect as applying fertilizer as it unlocks plant nutrients already present, and it is more cost effective as well.

The preferred pH before establishing a new vineyard is 6.5 on sandy soils and 6.0 on clay soils. The soil Ph should never be allowed to rise to 7.0, as it will generally create a potassium deficiency.

Cultivate until early July to help control weeds and prevent disease. To avoid root damage, do not cultivate deeper than 2″. Cultivation after mid summer increase susceptibility to winter injury; use mulch to conserve moisture and control weeds at this point. Wood chips, leaves, or grass clippings make an excellent mulch.

Grapes change color long before they are totally mature, so color alone is insufficient in determining when they have reached their peak in flavor, size, and sweetness.

Taste them first, that’s why you grew them right – if they’re to your satisfaction … Bon Apetit!

Most varieties should be used immediately because they do not keep well after ripening. Cut the clusters off with a knife or shears to avoid bruising the fruit and damaging the vine. Muscadine varieties, which grow either singly or in smaller, loose clusters can be shaken off easily when ripe. The storage life of grapes is relatively short, so they should be used or preserved ASAP.

How to Grow Hydroponic Cucumbers Indoors and Outdoors