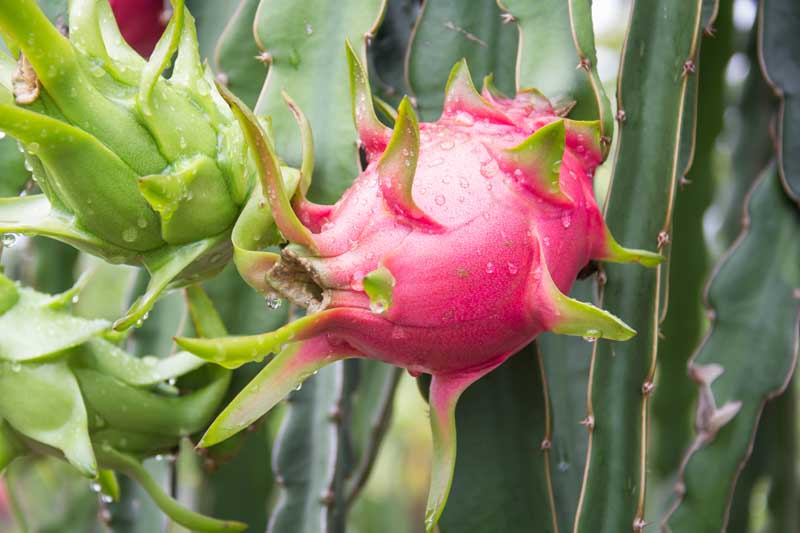 Dragon Fruit [pitaya or pitahaya] is produced by several different cactus species. Pitaya is the original name of what we now call Dragon Fruit.

In the early 90s, it was marketed in North America as dragon fruit and the name has stuck. It is sometimes referred to as strawberry pear or thang.

Dragon Fruit originated in Mexica and Central America but is now cultivated commercially in the Southwest USA, Florida, Southeast Asia, the Caribbean, and Australia.

The skin is leathery and bares protrusive scaly spikes. The spikes are fairly soft and don’t prick you as many other cacti do. The small seeds are similar to that of kiwi and lend a crunchy texture to the fruit. The pulp of the mature fruit is mildly but pleasantly sweet.

The flowers are also edible and used to make a tea.

They thrive in USDA zones 10–11. It is highly adaptive to its environment and can be grown as far North as zones 8 & 9 but not as abundantly. Dragon Fruit will endure temperatures over 100 o F, But long durations at these temperatures has been known to damage the fruit.

Dragon Fruit will also survive short bursts of frosty weather. They will not survive extended periods of freezing temperatures. Optimal temperatures for growing dragon fruit is between 65 and 85 degrees o F.

They also do well as potted plants grown indoors in cooler regions, a greenhouse, Florida room or sun-drenched porch would be just dandy, but a sunny window will suffice.

At least 6-8 hours of sun is needed. The container will need adequate drainage, several drainage holes. The container should also be large enough to accommodate a large plant. There are several popular varieties of Dragon Fruit that vary a tad in size but generally, a 3 – 5-gallon container is suitable to start. You can transplant it at a later date if need be when starting to form a smaller pot, but you may lose some in the process.

NEVER, ever allow the roots to become soggy, they are cacti, overwatering will surely be the end of them.

Seeds can be started in a potting soil mix made for cactus plants that is sandy and well draining or very dry compost with sand.

It is a vining cactus, so a support structure / trellis is advisable. In a container cactus it will flow over the edges. Outdoors it will sprawl along the ground.

Dragon Fruit Seeds can be purchased or self-collected. If using seeds you gleaned yourself they should be thoroughly cleansed of fruit pulp and stored till dry. It is advisable you use only the best Dragon Fruit specimens for seed saving, free of blemishes and over-ripe.

Seeds under the right conditions, will germinate within a week give or take a few days either way.

Even though they are not that difficult to start from seed, cuttings are a good way to go. Grown from seeds they take much longer to bear fruit and have a lower survival rate. Cuttings will sprout roots with or without soil and are generally ready to plant within a week.

Cuttings should be 1/2 ft to 1.5 feet and taken from a healthy vine. Cut through the vine at a slight angle in order to expose a larger surface area.

I like to spread a thin layer of honey over the exposed cut. Honey works well as a rooting hormone the benefits of Honey as a rooting agent are three-fold – enzymes to stimulate new root growth, anti-bacterial and anti-fungal properties to curtail infection, and nutrients via its natural sugar content. A win, win and win again menage trios of properties/qualities. See: Honey as a Rooting Agent .. Fungicidal rooting hormone powder will also work

DO NOT put the cutting in water as is done with some plants – remember it’s a cacti. Place the cutting in a dry area out of sdirect sunlight, but not completely in the dark either. Wihin about a week you should see should roots sprouting from the cut area.

Fill your container with a suitable potting mix and place the cutting root end down roughly 2 inches below the soil surface. You don’t need to have any part above the soil, as it grows it will seek out the sunlight by itself.

The potted cutting should not be in direct sunlight – partial diffused light is best. Water the soil very lightly twice monthly and only after it has dried out completely.

Don’t transplant till the plant is 6 to 8 weeks old and producing helathy growth.

If planning on transferring them to the great outdoors you should wait 5 – 6 months for them to be strong enough and have developed an adequate root system.

How to Pollinate Dragon Fruit

A strange thing about these cacti is that they flower at night and do so up to 6 times a year. Most varieties need pollination, they are not self-fertile, bees and most butterflies are not out at night to do the trick.

In nature they rely on bats and moths for pollination, Growing them indoors? … got bats and moths in your house – No – didn’t think so. If you keep them indoors and want to get fruit you’ll need to hand pollinate See: Indoor Pollination. There are several varieties of Dragon Fruit produced via cross-breeding that are hailed as self-fertile but cross-pollinating with a second plant increases fruit yield and quality.

Excessive moisture from heavy rain or overwatering can cause the fruit to rot and flowers to drop. Mature fruit will sometimes burst and split. Stem rot, brown spots on the fruit, and some fungal issues do occur – but rarely.