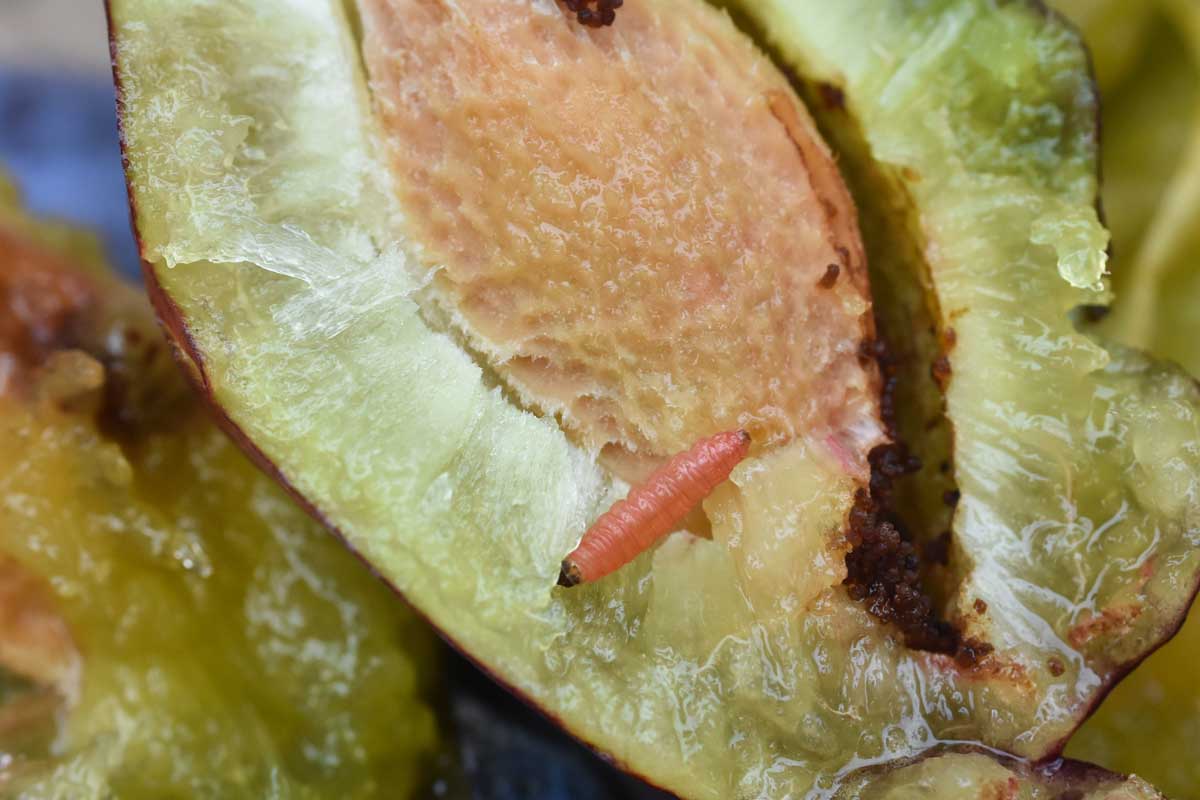 Worms that Feed on Fruits and Berries

Worms are basically the Larvae, immature stage of any of a number of insects. Primarily various moth species. However some varieties of Beetles commonly produce worms fairly indistinguishable in general appearance and feeding habits from moth larvae.

There are thousands of varieties of Worms that will feed on fruits and Berries. Some are highly restricted so far as their habitat, range and preferred crops. Other are more wide spread. Some are rare and some are all too common. In some cases the green worms on your fruit may be climbing cutworms or army worms.

Identification of the Most Common Fruit Worms

Raspberry Fruit Worms are the larvae of a tiny beetle, known as the raspberry beetle.

They feast on the leaves of raspberry, blackberry and related bramble, generally the youngest new canes and leaves. When populations spike they will attack the entire plant.

Blueberry Tip Borer is a tiny moth that emerges sometime in early Summer and deposits eggs on the undersides of tip leaves. The larvae bore into the plants woody section forming a channel several inches in length which causes the shoot to wilt and die back.

Blueberry Stem Borer – In late June / early July, the first three to four inches of the current season’s growth may wilt or be destroyed by this pest. this can occur on large, rapidly growing suckers or on small, slow-growing twigs. An examination of the injured twig reveals girdling in two places, about 1/2 inch apart, caused by egg deposition.

Named Green Fruitworms, not only because they are primarily green, but because they feed on Green or immature Fruit. Young green Fruit worms larvae feed on leaves. Fruit feeding usually begins about petal fall and continues until larvae have completed their development.

The Corn ear-worm also known as the Tomato Fruit Worm will devour buds and flowers of tomato, pepper and eggplants and will sometimes bore into the stems, it prefers unripe green fruits. Larvae, after entering fruit generally go unnoticed until it’s too late and extensive damage has been done.

Cranberry Fruitworms are a serious pest of blueberries, cranberries, and cherries. Infested berries may be harvested without detection, resulting in worms being found in packaged berries, not a pleasant sight when you’ve already eaten a few, good protein though. At most stages they are indistinquishable from Cherry Fruit Worms.

Cherry Fruit Worms cause severe damage in blueberries, cranberries and Cherries. It causes its injury by boring into the fruit. The larvae bore through the epidermis shortly after they hatch. This early injury can be detected in a few days. The larvae may feed extensively just below the surface. A maturing larva may damage more than one fruit.

We don’t always think of tomatoes as Fruits, they are generally relegated to the vegetable realm, but from a botanical point of view they are fruits.

The Tomato Hornworm is an extremely destructive pest of tomato, potato, pepper, eggplant and tobacco plants. They consume leaves and stems as well as chewing pieces from fruit itself. Tomato horn-worms, although very large are often difficult to see because of their protective coloring.

Dill planted next to tomatoes will serve as a preferred trap crop; hand pick worms off the dill. Turning the soil in the fall will expose hornworm pupae to weather and predators.

Pickleworms are a tropical insect which routinely survives the winter only in deep southern regions.They feed on squash, cucumber, cantaloupe, and pumpkin. The blossom is a favored feeding site, especially for young larvae.

The pickle worm life cycle is approximately one month. Overlapping generations occur. Their minute eggs are white when deposited on the buds, flowers, and other portions of the plant, but change to yellow after the first day. They are distributed in small groups, usually less than a dozen per cluster. Hatching takes about four days.

European Corn Borer larvae are 3/4 to 1 inch in length and creamy-white to pink in color. In addition to corn, They feed on over 300 different plants, including green peppers, and bush beans.

The South Western Corn borer is a more difficult insect to control. It has two to three generations per year. First-generation infestations do not often cause much damage. Second and third-generation larvae can be devastating.

Fruitworm control begins with meticulous monitoring. You can hand pick the larvae off on small trees and bushes in light infestations. Getting rid of the larvae early will prevent later generations. Watch for damage to foliage, buds and shoots. Immature fruits that are still forming may have brown scabs or scars which are indicative of fruitworm feeding.

Any pesticide labeled for use against Cooddling Moth is effective against fruit worms. Many are not all that eco-friendly. In my opinion and experience, I have found that bio-pesticides give the greatest range of protection with the least amount of risk to the ecosystem of your garden.

Spinosad  is a biopesticide , correctly termed a microbial pesticide, harmless to humans. Spinosad will interfere with pollinators as well as pests – evening / night time use is advisable.

Bt – bacillus thuringiensis. – Diamond Back Moth has developed some resistance to it – has proven effective against garden worms , it is a bacterium / organic pesticide that is readily available to home gardeners. It’s harmless to people and pets. It’s not a miracle cure but as stated , it is highly effective. Apply it at either bloom or petal fall, or both. Bt It is a stomach poison and must be ingested . It is more effective when applied during warm, dry weather while the larvae are actively feeding. Bt breaks down quickly in nature so multiple treatments per season are necessary.

Neem and various derivatives of their active ingredient Azadirachtin are an effective Biopesticide that works by interrupting the insect’s growth cycle resulting in its early death.

Diazinon  can be applied at petal fall, but is not as eco-friendly as the bio-pesticides listed above as it is toxic to beneficial insects and pollinators. Other Broad-spectrum insecticides, such as pyrethrin or malathion only as a last resort, generally used commercially and not really advisable for smaller plantings or home gardeners.

Most Sprays/Pesticides must be applied in the pre-bloom stage to prevent injury. Do not apply insecticides, even bio-pesticides during bloom time to protect vital pollinating insects.

Are Green Potatoes Safe to Eat?