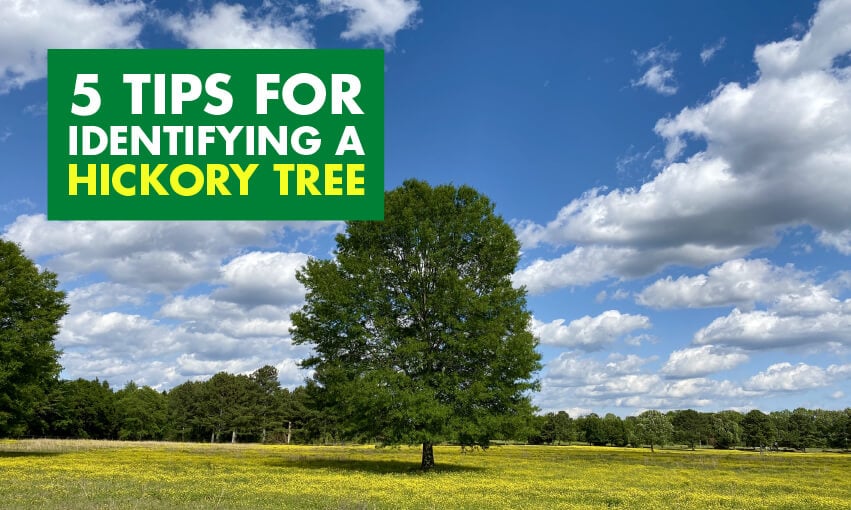 If you enjoy the outdoors, it might pique your interest in knowing the different types of plants and trees you come across. One tree species that is always handy to know is the popular Hickory tree. Do you know how to identify a Hickory tree?

Let’s take a look at five tips for identifying a Hickory tree and ways to identify its many different species.

How to Identify a Hickory Tree

1. Look at the Leaves

The leaves of a Hickory tree have a distinct shape different from other types of leaves on trees. Hickory trees have leaves the grow long and narrow. And on each stalk, several leaves are growing.

Depending on the type of Hickory tree, the length of the leaves will vary. Generally, you will find the leaves range from two inches to eight inches. The leaf’s shape will also vary from specie to specie, but overall, you should look for narrow leaves with either rounded serrations or sharply pointed teeth.

2. Look at the Stalk’s Shape

The stalk’s shape will also give you a clue as to whether you have got a Hickory tree or not. The Hickory stalk, or rachis, will typically have about five to 17 leaves on it. The leaves will always grow in opposite pairs that are perpendicular to the stalk. At the end of the stalk, there will be one leaf without a pair. As you work your way up the stalk, the leaves will gradually get bigger.

Hickory trees also have a distinct bark formation. The ridges of Hickory bark grow in a vertical direction. The ridges can either grow close together or far apart, depending on the species. With older Hickory trees, you will notice that the ridges are raised at the bottom, and may peel off from the top to the bottom.

4. Do Hickory Trees Have Nuts?

Like most trees, Hickory trees grow nuts throughout their lifetime. Hickory nuts have a huge outer shell that is woody. Young hickory nuts are green, but as they mature, the husk turns a dark brown. Inside the husk, the nut is tan in color and is about as large as a marble.

The center column of a tree’s branches is known as the pith. Some trees have circular piths, but all Hickory trees will have a five-sided pith that looks like a star when the branch is dissected. The pith should be solid and tan in color. 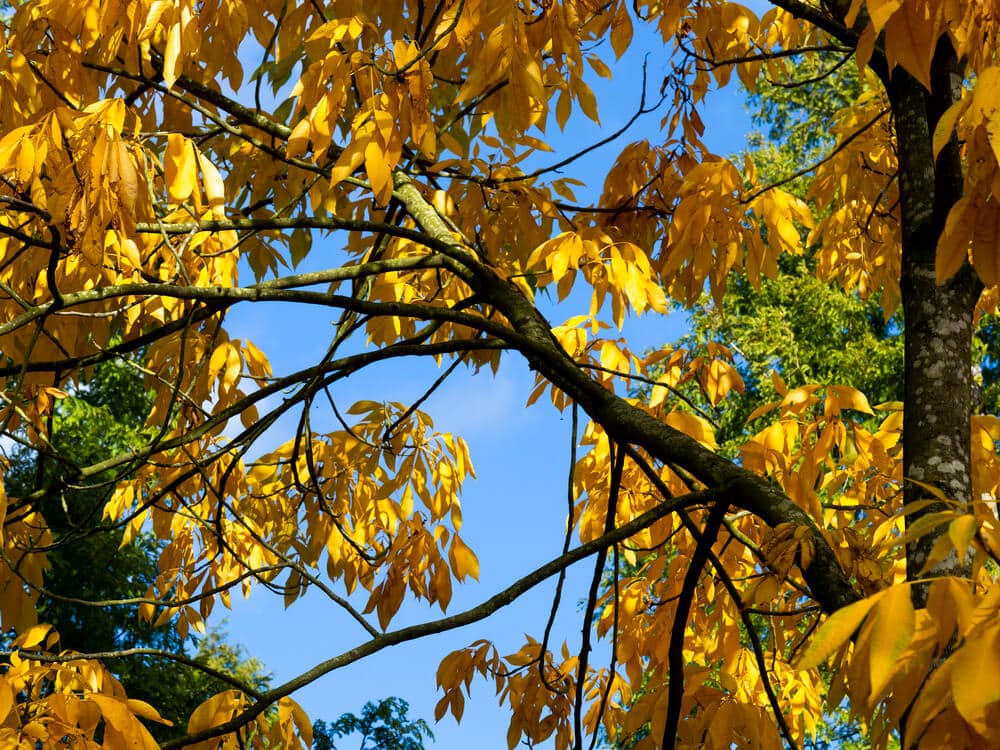 This type of Hickory tree is easily identifiable by its jagged edge leaflets that grow out with a sharp point on the end. The nuts of a Southern Shagbark are typically oval and measured 1.2 to 2 inches in length. Additionally, you can expect this type of Hickory to have thick, brown twigs, and the bark is usually scaly with raised edges.

Bitternut Hickory has a distinctive look with its leaflets that are much smoother and larger than average. The nuts are comprised of a dark brown husk that is generally thin, with the nut growing to be about .8 inches to 1.5 inches in length.

Bitternut Hickory gets its name from the bitter taste the nut produces. Lastly, look for slender green twigs and light green or light brown bark that define this type of Hickory.

Pignut Hickory has a very distinct look as well. The leaves are sharply pointed, have serrated edges, and are dark green in color with shiny leaflets. The nuts are distinct too with their light brown color that is relatively round, measuring 1 inch by .8 inches.

The twigs are distinctive with their slender growth and gradient of deep purple to light green. You can also identify Pignut Hickory with its deeply recessed, scaly, light grey, and brown bark.

Kingnut Hickory has inconspicuous waxy green, medium-sized leaflets. A stalk can be rather long at 9 inches. You should look for a think, dark brown husk that encases a sweet kernel when it comes to the nuts. The size of the nut is the largest of the species, hence the name Kingnut. Twigs of Kingnut Hickory are thin with rounded bulbs while the bark is long and narrow.

Where does the Hickory tree grow? Each species varies, but the Red Hickory grows on forest ridges and slopes. The leaves are a distinct green and red color. The nuts feature a thin, dark brown husk that grows about 1 to 1.2 inches in length. The bark of Red Hickory is the most distinguishing as it is rough, thick, and does not flake.

Mockernut Hickory can be found growing in sloped regions, dry land, and ridges. The nuts are of average size at 1.5 to 2 inches in length. The leaves are medium in size, waxy, light green, and rounded. Typically, you will find about seven leaves on a rachis.

The bark is also distinct with its deep and vertical furrows that are close together. The bark may furl at the edges with some Mockernut and begin to fade, especially if it’s an older Mockernut Hickory.

Sand Hickory has its own unique look with its light color construction. The leaves are rather thin and narrow with smooth edges. The nut is relatively small, ranging fro sizes of .5 inches to 2.5 inches in length. The bark is also pretty distinct with its smooth, light-colored bark that forms shallow furrows.

The next time you are outdoors, we hope that our handy guide will allow you to distinguish a Hickory tree and the different species. Are there any Hickory species that you think are easier to identify than others? Let us know in the comments section below!

Related: 5 Ways to Pick Up Acorns from Your Yard

How to Condition and Improve Your Garden Soil

How to Grow Hydroponic Kale: The Guide to Growing Kale Hydroponically