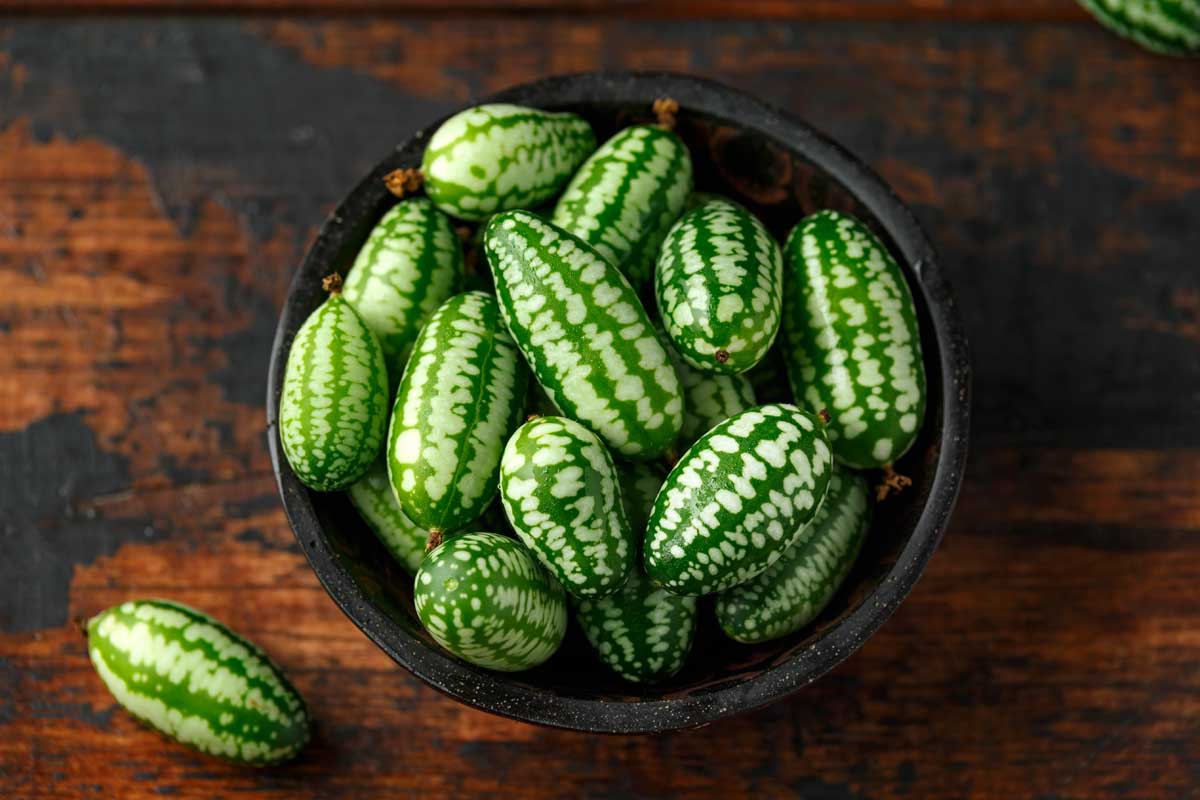 How to Plant, Grow and Care for Cucamelons

Temperature for Transplant [after hardening] 65-70 F

A Mexican and Central American native that crossed the border legally is hard to find, But the Mexican Mini Watermelon came from this region [documented] where it is called sandita meaning little watermelon.

Mexican Mini Watermelons are the size of grapes, look like miniature watermelons but taste like cucumbers and lime – Pickles that have never seen the brine.

They are more closely related to the cucumber than watermelon. They are a central American heirloom delicacy that’s been eaten in Mexico since pre-Colombian times. They are pretty much pest free, drought resistant and relatively easy to grow.

The plants produce abundant harvests of 1-2″ fruits. Sow seeds outdoors in one foot diameter hills, Space hills 4′ apart . Plant outdoors only after the last Frost Date in your area. Cucamelons can also be started indoors up to a month before the last frost for an early harvest.

Germination can be a tad tricky at times. The germination rate is low and they have a long germination period – generally about 3 weeks, but up to a month. Sow more seed than you will actually need to increase your odds, and maintain them in a consistently warm environment, if you live in a cooler region. Cover seed trays at night with a clear plastic lid to help keep the warmth and humidity in.

A Fertile & Well Draining Soil is also essential, use a quality organic soil with organic material and compost.

When flowers first appear you should feed your Cucamelon small amounts of fish emulsion once weekly. This will ensure that fruit production remains prolific. Avoid excessively high nitrogen fertilizers, you’ll get great vines but little fruit production. Bone meal occasionally would also be helpful. Soil pH should be mildly acidic 6.0 to 6.5

Although they are drought resistant, they do best with consistent moisture. Vines will need support such as a trellis similar to cucumber trellises or a cane support.

Harvest them when they are the size of a small grape, but still firm. The firmness is important, leaving them on the vine too long will result in a soggy texture and unpleasant bitter flavor.

They are perennial and produce tubers that in their native lands re-sprout seasonally.

In non-tropical climates lift the tubers from the ground in late autumn and store them either indoors or in a slightly moist soil and frost free area, at the bottom of a compost pile works for me. See: Cucamelon Tubers