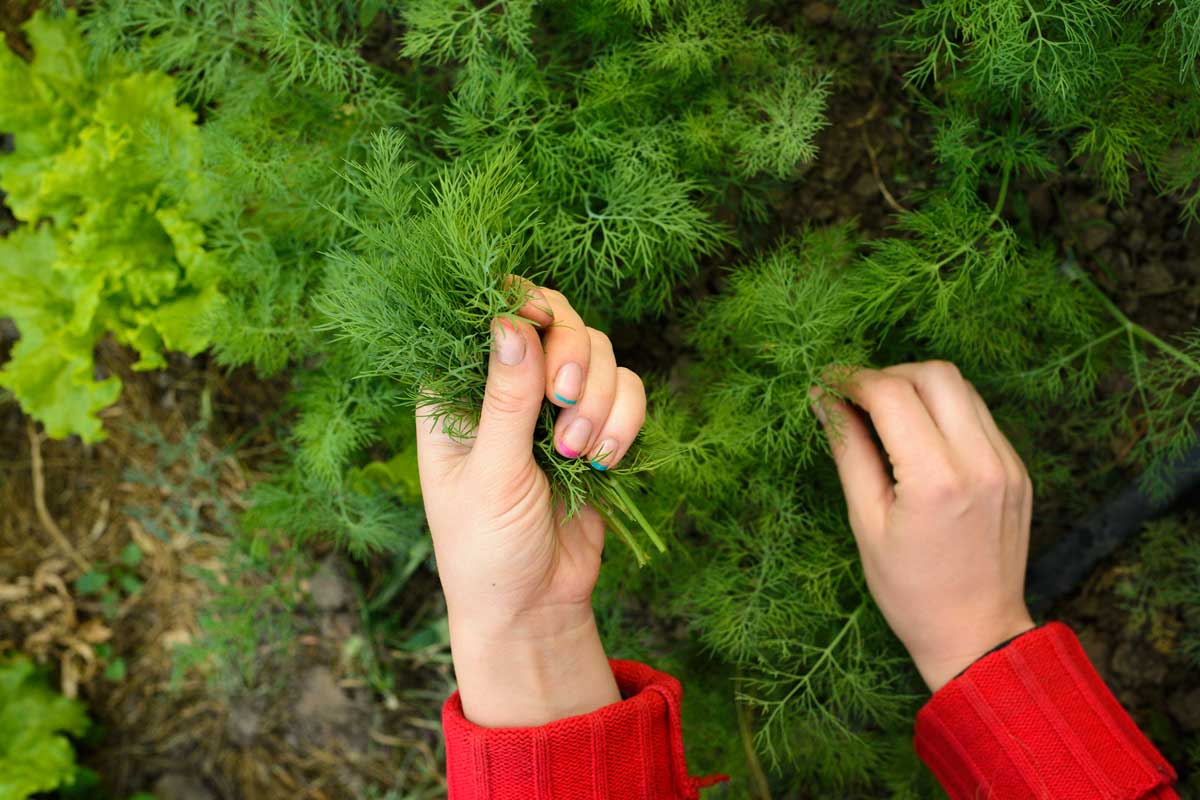 Dill is a biennial herb / spice, with feathery green leaves, it produces attractive yellow-green flowers in both spring and fall. Dill is used most commonly for Pickling, such as “Dill Pickles” – but is also used in other culinary delights such as soups and stews.

Dill is known to attract beneficial insects to your garden, Lady Bugs and predatory wasps in particular. You should however take care as to where you place dill in a vegetable-herb garden, although it is advantageous in some companion gardening schemes it is detrimental in others. Dill compliments the growth of Brassicas [Cabbage Family] and onions, But stunts the growth of carrots.

Dill also attracts the Tomato hornworm , an unwanted guest, and is frequently used as a trap crop for them. Dill should be kept a safe distance from fennel, cross-pollination of these two herbs produces undesirable results. [See:Companion Gardens]

Most dill generally reaches a height of 2 to 4 feet, Other varieties are more compact, reaching only 2 feet tall maximum. It is a warm season herb, not hot just warm. The soil should be around 60 to 70oF for best results.

Dill does not always perform well when transplanted, but will reseed itself if permitted to. Sowing seeds every two weeks will help to ensure a season long supply of fresh dill.

Full sun is best, but partial shade will suffice. Well drained soil, rich in organic matter is best, soil pH between 5.5 and 6.5 is optimal.

Dill does best in the spring and again in early fall, it does not produce well during the dog days of summer.

Plants should be set out after the last spring frost OR 2 months before the first winter frost date. The first winter frost will kill off any dill plants. However, if it had time to go to seed, the fallen seed may produce new plants in the spring. Commonly dill is spaced 12 to 16 inches apart, the more compact fern like varieties would naturally be towards the 12 inch end of the scale , and the bushy varieties towards the high end.

Plants might need to be staked when in full bloom to prevent the flower stems from toppling over, particularly in windy areas. You can harvest the entire plant as soon it flowers, or you can delay flowering by keeping the plants cut back, this will serve to extend the harvest. Water the plants abundantly throughout the growing season, just don’t drown them.

Dill attracts worms, Tomato horn worm and also the celery worms , which are the larvae of the swallowtail butterfly. The black swallowtail butterfly adult is a pollinator and attractive insect to watch flutter by . The larvae probably won’t do much damage to the dill, but they can wreak havoc on other garden plants such as cabbage, carrots and parsley.

Dill is sometimes used as a trap crop , where the caterpillars can be drawn away from other crops and picked off.

Cut Worms and army worms will attack dill. Some types of Aphids also feast on dill.

Copper based fungicideswill help against most of these diseases. for control of Downy mildew, Powdery mildew, Cercospora leaf blight. Be certain you are addressing the correct disease at the correct time when applying any fungicides.

Harvest and Storage of Dill

Dill produces a greenish yellow bloom that has aesthetic appeal in floral arrangements. Once the blooms appear, it’s time to harvest the entire plant. You can actually harvest any time between the seedling [As soon as the plant has four to five true leaves] and blooming stages. After the bloom stage , the quality degrades.

Dill can be dried or frozen. You can freeze leaves by snipping off the whole branch, place it in a plastic freezer bag, and store it in the freezer. Dill leaves can also be preserved in oil. If preserving in oil, be aware that botulism and other bacterium can survive in air bubbles in the oil.

The flowers will only last a few days in a vase, or they can be dried also.

The dill seeds are commonly used in pickling and salad dressings and assorted recipes.