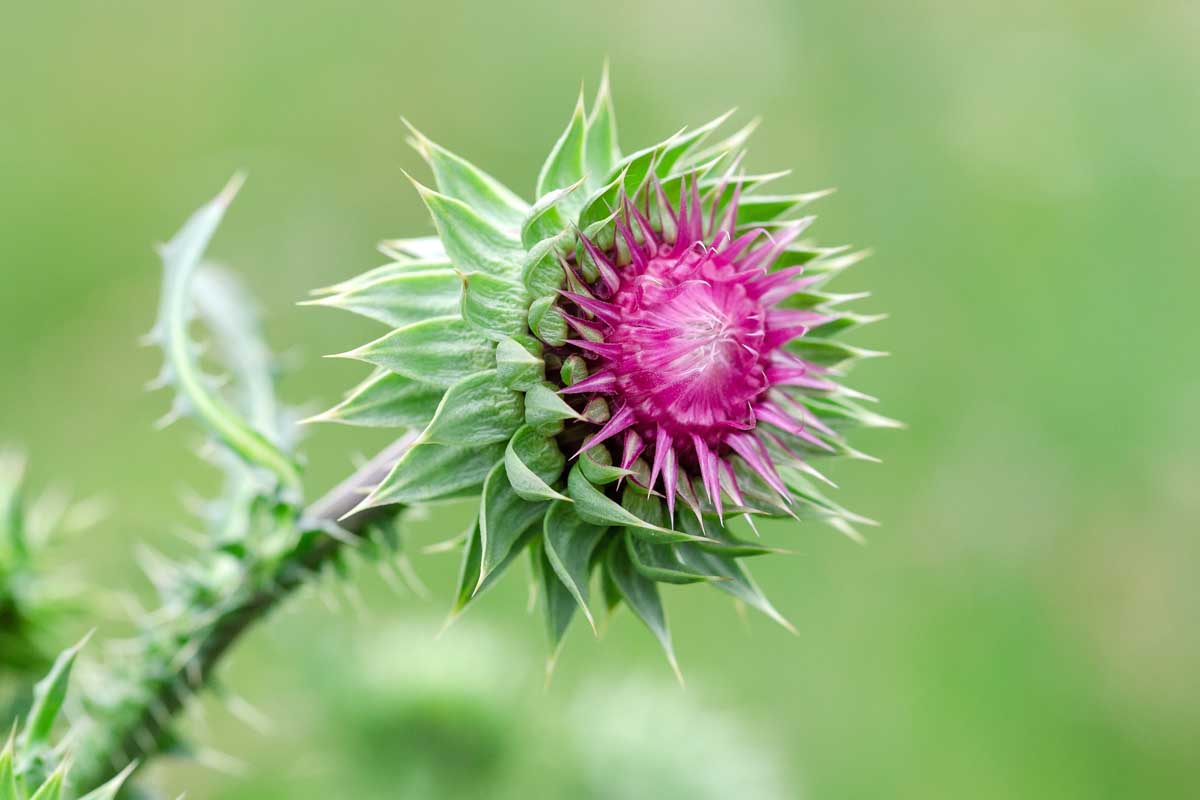 The milk thistle (Silybum Marianum) is a little known plant in the daisy family and also related to artichokes.

It is cultivated in some places, and in others it is considered a “noxious weed”. Milk thistle plants produce a single purplish-pink to lavender flower in late summer, hedged within a spiny thistle structure.

The stems are smooth and frequently have a white peach fuzzed skin. The leaves have sharp spines that run down the stems forming a large protective base just above the soil level.

Milk Thistle is a biennial which takes 2 years to complete its growth cycle and is grown primarily for its seeds which contain extremely high concentrations of silymarin.

Silymarin is beneficial to the liver and gall bladder and used to treat liver damage.

It is an anti-oxidant that reduces oxidation within the body and reduces free radical production. It has been proven to have a positive effect on alcohol related liver disease and hepatitis.

Milk Thistle is hardy in USDA zones 5-9. It is fairly easy to grow. It grows in spots where you wouldn’t normally consider placing a cultivated plant. It is not very demanding as to soil type, and grows well on compacted clay soils.

A Smidgen of high nitrogen fertilizer as well compost or dry manure is advisable. A thin layer of organic mulch wouldn’t hurt either.

Early direct seeding is best as the plant requires up to five months to mature.

They can also be started indoors for transplant outside when conditions warrant it. Seedlings should be hardened off prior to transplant and spaced approximately a foot apart.

Milk thistle is drought resistant and does not need to be watered, standard natural rainfall will suffice in all but desert regions. Light watering can’t hurt during seed germination but should cease when seedlings break the soil surface. Indoor seedlings should be treated as cacti and watered lightly once a week.

Milk thistle has very few disease and pest problems. Occasionally some beetles, but nothing of major concern.

It is toxic to some livestock, not because of its inherent compounds which are harmless to people. But because the interactions of these compounds – [in particular potassium nitrate] – with bacteria in the stomachs of sheep and cattle will set off a chain reaction that leads to oxygen deprivation.

Seeds are black when mature, while immature seeds are beige to light brown. Maturity peaks in early Autumn. The milk thistle seed head will bursts open on its own when fully mature ,at which point it would be near impossible to harvest the seeds.

hey should be harvested as soon as they turn black. When harvesting it is a good idea to wear some protective gloves as the spines and thistles are quite prickly.

Cut the blossoms off at the junction of the flower head and stem. Place the entire flower head in a paper bag to allow it to dry out completely – which should only take about a week.

Once completely dry shake to bag vigorously , which will dislodge many of the seeds.What remains within the flower head can be picked out manually.

You will end up with some chaff which can be easily separated with a light outdoor breeze or a fan. Each flower head should yield between 150 and 200 seeds, healthy plants produce about 1 /4 pound of seed over their lifetime.

Milk Thistle stalks, leaves, roots and flowers are also edible. The prickly spines should of course be removed first [ouch] -the leaves make a good spinach like dish when cooked.

The stems can be used like asparagus but are best taken from young plants, just like people, some will become very bitter when they age.