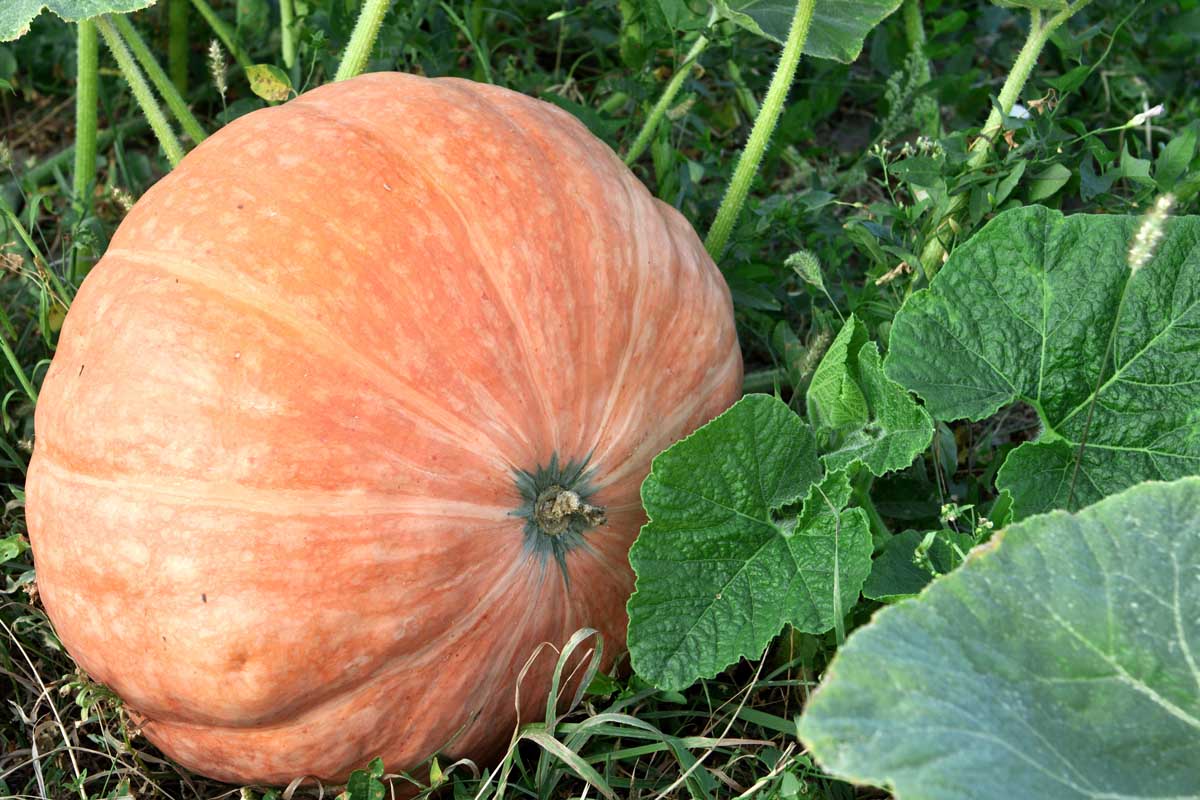 Pumpkins are a member of the Cucurbit family which includes Squash and cucumbers. They are rich in Vitamin A and potassium, and are pretty much an overlooked Vegetable other than on Halloween.

You can sow the seeds directly in the soil, or start them off early in planters. In either event don’t place either seedlings or sow seed outdoors until the threat of frost has passed. Start with a rich soil , check your Soil ph and use a fertilizer with a high phosphorous content when first planting to stimulate root growth.

Direct seeding pumpkins is not recommended in areas with short growing seasons. Pumpkins need at least three months of frost free, warm weather. If you live in a cool climate, start pumpkins indoors.

Plant semi-bush varieties one inch deep with 6-8 seeds per hill, based on the assumption that all will not germinate,( if using transplants use 3-4 Plants.) If too many seeds germinate thin to the best 3 plants per hill. . Allow 4 feet between hills and 8 feet between rows.

Plant bush varieties one inch deep with 2 seeds per foot and thin to a single plant every 3 feet. Allow 5 feet between rows. Bush varieties are the best for limited gardening area.

Plant miniature varieties one inch deep, with two or three seeds every 2 feet in the row. Rows should be 6 to 8 feet apart, with seedlings thinned to only the best plants every 2-3 feet .

The giant varieties develop so rapidly and large that they may actually break from the vine as they expand on a vine anchored to the ground.

Vining pumpkins require a minimum of 50 to 100 square feet per hill. Plant Vining seeds one inch deep with 4-5 seeds per hill and 5-6 feet between hills, Rows 10 to 12 feet apart. When the plants are well-established you may want to thin them out to the best plants per hill.

When the vine is about five feet long and has set three to four good fruits, pinch off the growing tip and remove all new flowers to direct the plant’s energy into ripening the crop.

Being large plants that produce a large fruit with a high water content, pumpkins require more water than the average garden vegetable. Pumpkin plants are also heavy feeders they absorb nutrients from the soil by absorbing the moisture / water in it.

Keep the pumpkins evenly moist and water deeply during dry spells. To prevent mildew, water pumpkin plants at their base, avoid watering the pumpkin foliage, as this will minimize the occurrence of opportunistic fungal infestations.

During dry periods of little or no rain fall , a slow, deep soaking will be needed about once a week. Water steadily until consistent puddles form on the surface of the soil.

As stated before, pumpkin plants are heavy feeders they need fertile, aerated soil that is 70 to 90 derees for proper germination. Work compost or well-rotted manure into the soil. The ideal pH for pumpkin and squash growth is between 6.0 to 7.5, but they will grow on soils with a pH of up to 8.0.

The first stage of fertilizing should be based on providing phosphorous for root growth, A high-phosphorus fertilizer of course -has a higher ratio of phosphorus than the other macro-nutrients – nitrogen and potassium.

The center number on a fertilizer label indicates the phosphorus content. Fertilizer labels express the percentage, by weight, of each nutrient. A high-phosphorus fertilizer would have a ratio such 5-10-5, double the weight of nitrogen and potassium.

Excessive phosphorus can lead to premature flowering, a weaker plant later and a smaller harvest. {5-10-5 or 5-15-5}

As the plants become solidly rooted, gradually shift to a more balanced formulation with more nitrogen than phosphorous. Nitrogen is represented by the first number on a fertilizer label . Too much nitrogen can delay the emergence and reduce the amount of flowers and fruit.

As time progresses, prior to fruit setting switch to higher potassium formulation for development of the set fruit. Potassium is represented by the third number on a fertilizer label.

Companion planting is a system of planting various plants in proximity to each other in a fashion that will compliment each others growth and health, as well as avoiding planting in proximity to plants that do not get along well together. Pumpkin grow well with corn, melon and squash.

I don’t have much of a raccoon problem anymore {my 2 German shepherds handled that issue very nicely } but a few years back – I did , my corn was unmolested – whether it was due to this planting scheme or just dumb luck I can’t say for certain.

Marigold planted in proximity will deter many varieties of beetles. Nasturtium as well as oregano deters beetles and several other harmful insects.

Avoid planting pumpkins in proximity to, or in the same plot that Potatoes have recently grown – recent being the last several seasons.

If feasible, don’t plant squash, cucumbers, or pumpkin on the same plot more often than once in a three-year cycle.

From a gardeners point view, non ornamental Plants are merely a support system for the best growth of fruit. Pumpkins , if left to their own devices, will grow rampant throughout your field and or yard. Adequate spacing of plants is the first step in this process, however after the plants are established will you need to train the vines to grow in the desired direction as well as prune them. Proper pruning of pumpkin vines will force the plant to devote it’s energies towards fruit growth.

As stated earlier on this page When the vine is about five feet long and has set three to four good fruits, pinch off the growing tip and remove all new flowers to direct the plant’s energy into ripening the crop.

Trimming a vine is not rocket science, although some garden gurus would have you believe otherwise. Simply cut the vine at the end, preferably even to a lateral shoot.

Use of a sharp knife or pruning shears is recommended, if your vine is woody in texture you may strip off more of the plant surface than is necessary.

Some Gardeners bury the cut end under a shovelful of soil to minimize moisture loss while the wound is fresh. I generally avoid this practice as soil borne pathogens may well find an easy access point to your plant.

Shortly after pruning the vines, you may notice a spurt of new vines and runners popping out. You should continue to pinch off excessive new growth, not all, but most new growth, eventually the plants energy will be directed toward the growth of the pumpkin rather than excessive foliage. A little extra potassium and less nitrogen will also encourage the fruit growth instead of foliage and vine growth.

Don’t prune your pumpkin Vines, and you’ll probably still get some decent pumpkins, not as good as you could have, but the Great Pumpkin certainly shant be coming to your pumpkin patch this Halloween !

Pumpkins can be harvested whenever they are a deep, solid color (orange for most varieties) and the rind is hard. If vines remain healthy, harvest in late September or early October, before heavy frosts.

If vines die prematurely from disease or other causes, harvest the mature fruit and store them in a moderately warm, dry place until Halloween. Cut pumpkins from the vines carefully, using pruning shears or a sharp knife and leave 3 to 4 inches of stem attached. Snapping the stems from the vines results in many broken or missing “handles.”

Pumpkins without stems usually do not keep well. Wearing gloves when harvesting is advisable fruit because many varieties have sharp prickles on their stems.

Avoid cutting and bruising the pumpkins when handling them. Fruits that are not fully mature or that have been injured or subjected to heavy frost do not keep well. Store in a dry place where the temperature is between 50 and 55 degrees F.

After Harvest , any unripe pumpkins should be removed before they begin to decay. this helps to avoid the risk of pumpkin rot and other diseases that spread rapidly and kill vines as well as effecting other plants in your garden. I recently experimented with a practice of planting yellow mustard as an early winter crop in sections of my garden, particularly the pumpkin patch.

Gardeners as well as farmers will scatter the mustard seed, sometimes while the ground is beginning to freeze, the seed works its way into nooks and crannies in the soil.

Come early spring, a small percentage can be harvested but the majority should be plowed / worked into the soil. It’s a natural biofumigant. that depresses certain fungus in the soil. Try not to plant Mustard where root crops such as Turnips will be growing in the coming season.

How to Grow Hydroponic Carrots