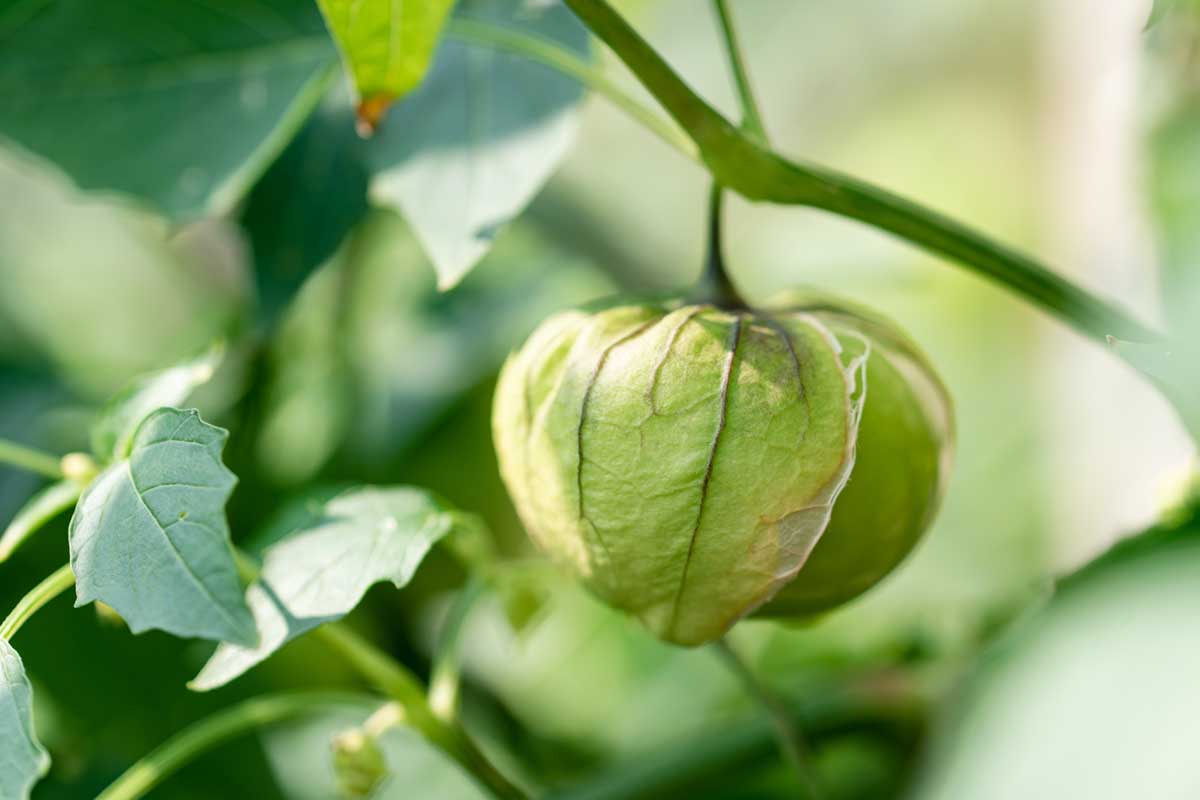 Perennial Grown as an annual

Tomatillos are 1 to 3 inch round fruits closely resembling a tomato. They are generally various shades of greens that ripen to golden yellow, some varieties to a hardy orange similar to tomato, there are also some purple varieties. The taste is similar to tomato but with its own distinct flavor.

When growing tomatillos keep in mind that they are not self pollinating and at least two, preferably more plants are required in order to produce fruit. Non pollinated tomatillo plants will produce an empty husk, no fruit inside See: Empty Tomatillo Husks. A healthy well cared for plant can produce in the ballpark of a pound of fruit annually. That’s not really a whole heck of a lot, so it’s best to plant a bunch, a half dozen or more.

Although tomatilloes are considered perennials, overwintering can be difficult and they are usually grown as an annual.

Starting from seeds is workable, although transplants are most commonly used. Stem cuttings are sometimes done as well. Start seeds inside 6 to 8 weeks before the last anticipated frost date. In warmer regions, zone 8 and further south they can be started by direct seeding in ground.

Set transplants in the garden in spring after a brief hardening off period soil temperatures should be around 60 degrees [F] or better. Hardening off is a simple process of gradually acclimating young plants to the ravages of Mother Nature, in order to ensure their survival in the grown up plant world.

The seedlings are accustomed to a steady temperature, light supply, gentle or very little breeze and basically no environmental stress or disturbances that they will experience in the real world. Temperature extremes, rain, wind and so forth are to be expected in the outdoor realm. Hardening off allows the plants to toughen up and hone their natural defenses.

Full sun is best, but so long as its warm enough partial shade will suffice. Plant them just as you would a tomato plant, burying a portion of the stem. Space them about 2.5 to 3 feet apart.

Like tomatoes, a cage or trellis is advisable to prevent the plants from toppling over or sprawling along the ground. They can attain a height of 5 to 6 feet. A trellis or staking prevents the fruit from touching the ground, which reduces fruit damage and makes harvesting easier. It will also reduce the possibility of disease from soil borne pathogens and damage from snails and slugs.

Caring for tomatillo is very similar to that of tomatoes, keep the soil uniformly moist. Mulch will not only help to suppress weeds but to conserve moisture as well. Compost wouldn’t hurt, fertilizer neither but neither is absolutely essential as tomatilloes are much lighter feeders than the cousins the tomatoes.

Not Cold or Frost Tolerant they do best in warm balmy weather [Not drought tolerant either]. Daytime temperatures of 75 to 90 degrees [F] and nighttime in the vicinity of 60 [F]

Germination 65 to 70 [f]. Soil temperatures below 60 F will delay or even prevent germination. Hot soils over 90F will have the same effect. If you’re lucky and conditions are ideal you can attain germination in as little as 2 weeks, but as a rule of thumb 4 to 6 weeks is the norm.

They do best with ample water, and are not drought tolerant. Water as you would tomatoes and use an organic mulch. Organic mulch will suppress weeds and retain moisture.

When the husk becomes dry, papery and beige colored they are ready for harvest.