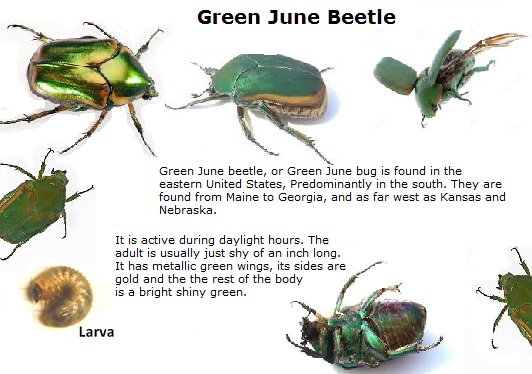 June bugs, a/k/a June beetle or May beetle, in addition to being a petty annoyance floating in our pools, and smacking into our windows can also cause some serious damage to edible and ornamental landscape plants. They are a type of scarab beetles and are cousins to the Japanese Beetle and about a hundred other species. The adult beetles appear in late May through June and early July.

The grubs of the June Bug can also cause damage to Edible and ornamental gardens and lawns. The damage is generally large brown areas of dead and discolored grass whose roots have been destroyed, these clumps of grass can be easily lifted from the soil.

Adult June bugs, the beetle stage, begin laying eggs in April and continue through may and June. Adult June bugs are reddish brown beetle and needs no further introduction other than a mug shot elsewhere on this page.

June Bugs are best controlled in the larval stage, when they are actively feeding near the soil surface. Control of grubs later in the season can be difficult, because the grubs are generally not feeding.

Biological control includes the use of existing natural controls. Enemies of pests (predators, parasites and diseases) that already are present Under ideal conditions, biological control has a sustainability that is lacking in some other management options.

are somewhat effective in Beetle grub control, even if you are using another beetle control such as Milky spore, the nematodes are effective against many other pests as well. Apply the nematodes when the white grubs are small. Water thoroughly before and after applying the nematodes.

Nematodes are microscopic non-segmented worms which occur naturally in soil all over the world. Thousands of strains exist with different lifestyles. Beneficial nematodes only attack soil dwelling insects and leave plants alone. The nematodes enter the host through body openings or by penetration of the body wall. Once inside they release a bacterium which kills the host within 48 hours. The nematodes continue to reproduce and its offspring begin to seek out new host material. Beneficial nematodes are a totally safe biological parasitic insect control organism.

is also effective for June Bug control during the Grub stage. Milky Spore is not harmful to beneficial insects, birds, bees, pets or man. The product is approved and registered with EPA, Milky Spore will not affect wells, ponds or streams. As Beetle grubs burrow through the soil, feeding -they ingest the spores . The spores germinate inside the grubs, and multiply rapidly in their blood. When the bacteria become very numerous in the blood they again form spores, completing the bacterial cycle. Infected grubs survive for a very short period after their blood has become loaded with spores, particularly in low temperatures. As the grub carcass decomposes, it releases billions of new spores.

Diatomaceous Earth can also help control Beetle populations, but only to a minimum,as part of an integrated pest management program it works fine against the grubs. It is not a cure all, but will help suppress populations of June bugs and other beetle populations.

Insecticides such as Sevin [1] will work on lawns and effected plants, but it is also harmful to some beneficial insects. Sevin or similar pesticides can be applied to any affected plants if the adult June bug is eating your plants.

A June bug trap will also help against the adult beetles. Using a small bucket or jar and place a bright light at the containers with a few inches of vegetable oil at the bottom. June bugs, as well as other flying insects, attracted to the light will drown in the vegetable oil en-masse.