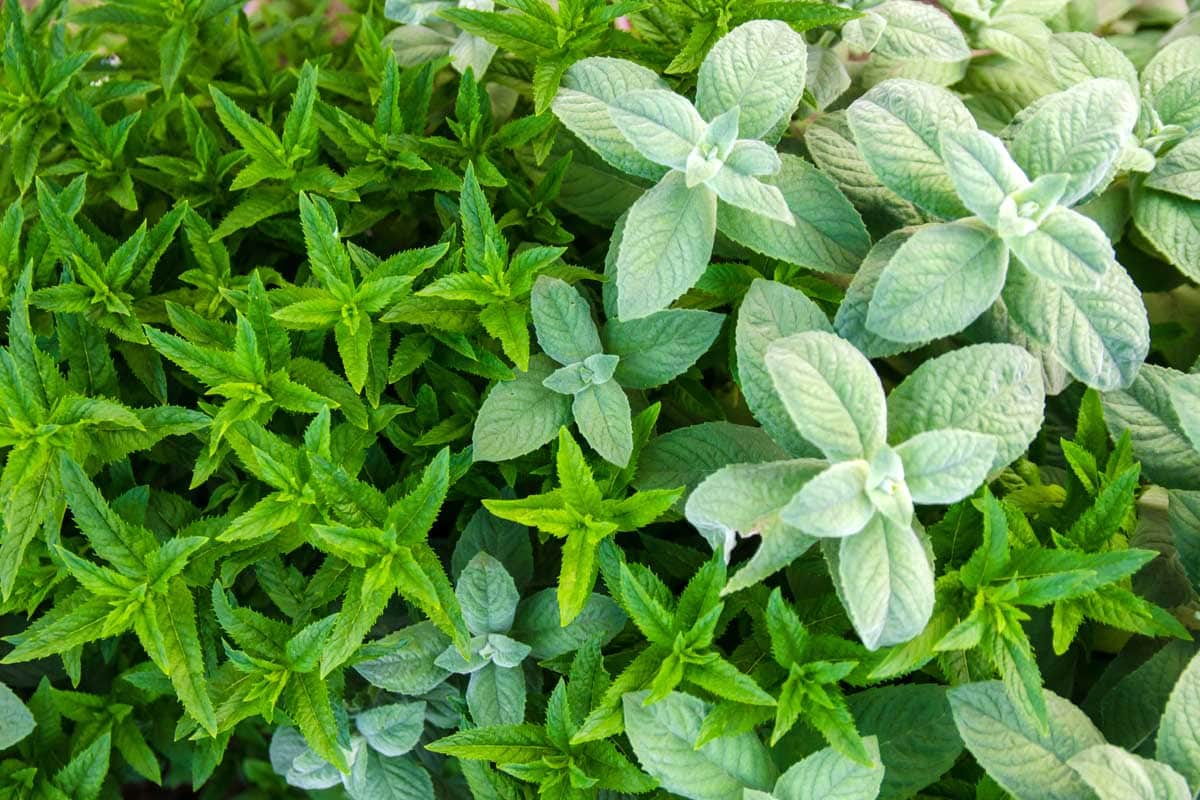 Some say there are over 500 types of mint, botanists define slightly less than 30 species with the remaining 400+ being hybrids of these primary species. The reason there is such a large array of mint plants to choose from is that it hybridizes very easily.

Two species of mint in close proximity to one another readily cross-pollinate, the result is not always favorable.

Common characteristics of all mint plants are the volatile and essential oils that create their hallmark menthol aroma and flavor. Other oils and compounds within various plants create a medley of tastes and aroma unique to their individual cultivars.

Apple mint for instance contains compounds that give a fruity taste and aroma, as does as the hybrid versions of apple mint pineapple mint, and Golden apple mint.

Other common characteristics of Most mint plants is that they thrive under similar conditions, although there are minor exceptions to every rule. Moist and well-draining soil, full to partial shade, soil pH are some of the nearly universal requirements for successfully growing mint.

Invasiveness is another common characteristic of nearly all mint plants. They spread like wild fire and will easily commandeer any garden or yard if not controlled. They are frequently grown in containers as a mode of curtailing their ‘imperialistic’ expansionism.

Most mint varieties are suitable for the culinary realm, some however are strictly for medicinal, aesthetic, or aromatic purposes.

Related: How to Grow Hydroponic Mint

Apple mint, Mentha suaveolens, is sweeter than most other mint varieties. Both its flavor and aroma are more fruity than minty. Apple mint is the cultivar that is most commonly used to make Mint Jelly.

Apple mint plants have fuzzy stems and foliage reminiscent of peach fuzz, for this reason, it is sometimes called wooly mint.

The flowers are white to pinkish-white and appear in late summer or early autumn. Perennial in zones 5 to 9 Mature height: 2 to 3 feet.

Banana mint has the delectable aroma and flavor of bananas which is not betrayed by its appearance.

The leaves are flagrant lime green and at times a tad fuzzy. Aside from their culinary attributes, banana mint is sometimes grown strictly for its aesthetic appeal and in bee butterfly gardens as its delicate lavender-colored blossoms appear most of the summer and attract bees and other pollinators.

Bee Balm is an attractive perennial flowering mint family plant. The leaves are used to make Oswego Tea. The plant is closely related to bergamot which is used to make earl gray tea.

It attracts bees, butterflies, and hummingbirds and is frequently suggested as a companion plant.

The plant blooms from early to late summer and grows 2 to 4 feet tall, depending on the variety. A few only reach 8-10 inches in height. Perennial in zones 4 to 9.

Catnip, also known as catmint, is in the Mint family and has many of the same attributes as other types of Mint. It contains an active ingredient ‘nepetalactone‘ a plant terpenoid that has an effect on the central nervous system in both cats and people.

It is frequently grown in tea-gardens or paired up with up other plants for its qualities as a companion plant. Catnip repels some harmful insects, flea beetles in particular.

Perennial in zones 3 to 9

Chocolate Mint is one of my personal favorites. As its name indicates it has a chocolate flavor coupled with the standard menthol common to all mint plants.

The combination of compounds and essential oils of this plant creates a delicious flavor and aroma reminiscent of chocolate mint cookies, thin mints and similar confections.

Is a low-growing creeping mint variety. It has a vibrantly bright green rounded foliage that is relatively small.

Grown as a groundcover it can be trained into a dense mat that rivals many lawns and will withstand reasonable foot traffic. In fact, when trod upon it releases a pleasant a peppermint aroma.

Small lavender flowers appear in summer. It is used as a flavoring agent commercially, Creme de Menthe liqueur contains Corsican mint as does many treats.

Mature Height 1 to 2 inches, sometimes a tad larger when hybridized or unkempt. USDA zones 7 to 9.

Bright green leaves with curled fluted rims which led to its name ‘curly mint’. Very similar to peppermint but a tad weaker so far as taste and aroma are concerned.

This plant is on the high end of the spectrum in its invasive characteristics and requires much more maintenance than its cousins of the Mint family.

Egyptian Mint has the trademark menthol/mint flavor in a more subtle concentration coupled with a fruity secondary flavor somewhat like Apple Mint.

The plant is fairly robust with an upright growth habit that is open allowing for a healthy airflow. The long pointed leaves are relatively large in comparison to most other varieties of mint also. They are green and covered in a velvety hair, much like peach fuzz.

Flowers are lavender to lilac and appear on the stem ends in mid-summer. USDA zones 5 to 11. In zones 3 to 6 it is best grown as an annual or potted and transported indoors in Winter.

Ginger Mint has serrated leaves that grow in opposing pairs. Its stem is burgundy to assorted red toned.

Unlike other mint varieties, the flower grows along the stem and not at the peak. Its flavor and aroma have a hint of ginger, but not very powerfully so. It is a hybrid cross between spearmint and corn mint.

Habeck Mint aka Bible Mint hales from the Middle East it is believed by some to be the mint plant referred to in several Biblical passages. Its Latin name is longifolia [Mentha longifolia] in recognition of its long slender foliage.

In addition to being long and slender as opposed to most other mint leaves, Habek mint leaves are a tad fuzzy, like a peach.

USDA zones 5 to 11. In zones 3 to 6 it can be grown as an annual or potted and transported indoors in Winter. Mature height: 1.5 to 2 feet

Lavender mint produces dainty lavender flowers, some growers incorporate lavender mint into their landscaping endeavors strictly for its aesthetic appeal. It also serves as eye candy grown as a ground cover or in a more restricted locale. Its lush green foliage and reddish-purple stems are also visually appealing.

In the culinary realm it has a subtle sweetness reminiscent of – yup that’s right lavender.

Lemon balm is a perennial, but in regions where there are long deep freezing winters, it is commonly grown as an annual. It dies back in the winter and reemerges in spring. It will remain green in areas with mild winters.

The flavor is more lemon with only a hint of mint.

Macho Macho Mint you wanna grow a macho mint. Mach mint has a robust ‘macho’ flavor and aroma, it is very pungent and highly abundant once established.

Unlike some of the sissy mints, macho mints possess a strong staying power and holds its flavor later in the season when other mints had fizzled and gone limp.

Moroccan Mint contains elevated levels of natural sugars which when coupled with its minty essential oils works well for brewing a tasty tea as well as mint preserves and confections.

It is exceptionally hardy and will grow in most soil types so long as it is watered well, it is not drought tolerant. It can be grown in standard gardens but many growers prefer to keep it potted to which it is well suited. It also does well in bee and butterfly gardens as it is known to attract these beneficial pollinators.

Orange Mint is useful as a flavoring for tea and assorted culinary delights. It is also popular in potpourris and like all mint has medicinal properties. The leaves are oval-shaped and light green. The stems are a purplish-green, sometimes burgundy.

When permitted to blossom in mid to late summer the delicately spiked flowers are white to pinkish white. Perennial in zones 4 to 11. In other areas, it is best grown as an annual or potted and transported indoors in Winter. Although Orange Mint is a perennial, its quality wanes after 3 to 5 years and should be replaced.

Of all the many varieties of Mint, peppermint [Mentha x piperita] is perhaps the most widely known and popular.

It has its origins in 18th Century England and has been used ever since as a flavoring agent for multiple confections as well as herbal concoctions and pharmaceuticals. There are several sub-varieties of peppermint which include Peppermint, Variegated Peppermint as well as black and white peppermint.

Perennial in zones 3 to 11. In other areas, it is best grown as an annual or potted and transported indoors in Winter.

Although Peppermint is a perennial, its quality wanes after 3 to 5 years and should be replaced. Mature height: 1 to 3 feet. If left unharvested and not maintained they can grow into 4 foot

Used to brew teas and in assorted beverages and confections. I’ve used it on occasion to make a wonderful pineapple mint jelly. It can be used in any recipe that calls for mint and will add its own distinct flavor.

Pineapple mint has ruffled variegated foliage with creamy white margins. The leaves will emit a light pineapple aroma when brushed against, the taste mirrors the aroma, minty pineapple. The plants attain a height in the vicinity of 1 to 2 feet.

It is very fragrant and like most mints will attract pollinating insects. The blossoms that appear on spikes atop the plant in mid-summer are an off white color leaning to various shades of pink.

There are multiple plants known as spearmint’s which are descended from common ancestors. Double Mint is a type of spearmint which is halfway between spearmint and peppermint in characteristics, aroma and flavor.

Spearmint is similar to peppermint but sweeter and not as minty. It is used commercially to make candy [spearmint gum] and serves well in any recipes that call for mint, keeping in mind that the flavor will be milder and sweeter. Mature Height 1 to 2 feet. Perennial in zones 3 to 11, however, some varieties will only thrive in 5 to 10.

Oh my, would you look at the thyme! Thyme, a commonly used herb, and spice is actually in the Mint family.

Thyme has very small flowers and leaves. Depending on the variety, the flowers can range from white to a deep magenta and all shades in between.

They need minimal care once established, a regular light pruning after the initial season is however advisable. Do this after the last early season frost, to prevent the plants from becoming brittle.

USDA Zones 5 to 9. Mature Height varies from a half foot or less to slightly over a foot.

Yerba Buena in Spanish translates to ‘good herb’ and is a name used for several aromatic plants in the mint family. In Latin America yerba buena most commonly refers to Mentha citrata, a true mint sometimes called ‘bergamot mint’ and similar to Orange Mint.

In the USA it is the name of two distinct plants. Clinopodium douglasii and Eriodictyon californicum, the latter is not a true mint. Yerba Buena commonly grown as a mint in North America is Clinopodium douglasii aka Indian mint or Oregon-tea. It differs from other mint plants as it is a low growing creeping variety that is best used as a ground cover. It has a sweet fragrance and a refreshing minty flavor.

It is very popular as an herbal health supplement and has culinary as well as medicinal properties.

How to Dry Gooseberries