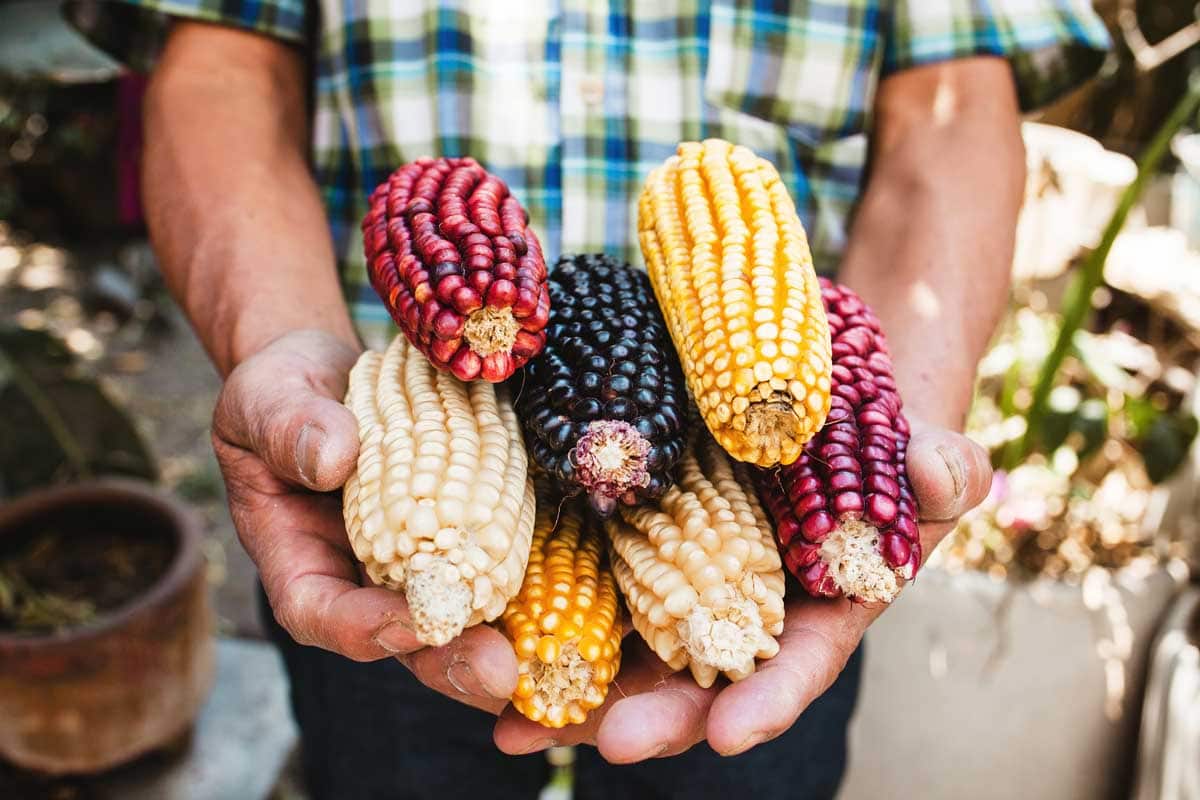 There are six basic categories of corn:

Waxy Corn is generally grown in Asia, it is similar to rice in texture.

Flour corn is mostly grown in South America and is used to make corn flour and starch.

Flint corn or Indian corn is rock hard, sometimes processed into corn starch and flour or animal feed. It is sometimes used for popcorn but most commonly known to the public as a fall decoration. Popcorn of course is just that – for popping.

The most popular and commonly grown corn by Home Gardeners is of course Sweet Corn followed by dent corn.

Dent corn or “field corn,” is an easily identified by the dent at the crown of each kernel. It is higher in starch than sugar and therefore not nearly as sweet or juicy as sweet corn.

As it’s not intended to be eaten fresh, dent corn is harvested at full maturity when the kernels are dry and hard, from there it is processed to make flour, corn starch and assorted corn products.

Many types of dent corn, if harvested early can be eaten like sweet corn.

Unusual and Bizarre Types of Corn

Red Strawberry Corn / Red Rue Corn is a miniature corn variety that produces 2 to 3 inch long strawberry-shaped ears . Not very good for corn on the cob but excellent for popcorn and for fall decorating. 4-foot stalks, bare 2 to 4 ears each. Grow it like any corn, however, do not harvest it right away – allow it to dry out on the stalk for about a month after maturity, then another month after harvested – to produce the best popping corn.

Glass Gem Indian Corn had its genesis in Oklahoma with a farmer named Carl Barnes. This corn produces diversely colored ears , sometimes the ear is dark sometimes all blues, or varying shades of pink – sometimes it’s a rainbow collage. Each ear is unique.

It’s sweet but not as sweet as jelly beans which an ear of glass gem corn sometimes resembles. It’s sweet when eaten at the peak of perfection, but it is not classified as a sweet corn. It is actually used for making pop corn and grinding into into cornmeal, flour and so forth. Used as popcorn , the kernels pop true to color.

Morado Purple Corn aka Maize Morado is an ancient Peruvian heirloom, a type of Flint Corn. It has deep purple ears with relatively large kernels. It has unusually high levels of antioxidants. Short corn stalks grow about 5′ high. Germination rate reported as high as 85% under favorable conditions. About 90 days to maturity.

The taste is comparable to standard sweet corn. It is not overly sweet – mild to blandly sweet with a creamy texture would be the best description. Peruvians usually boil them. In Ecuador and Bolivia they dry them first then burst or “pop” them in oil – somewhat like popcorn. We gringos can enjoy them the same as any other corn.

It’s value lies in its ornamental quality, not the typical fall decor as some varieties of dent corn but the picturesque beauty of the plant itself during the active growing season. Foliage is striped pink, white, green, and yellow. Tassles: Dark Purple to Burgundy. Corn cob / kernels are Deep Red to Purple Black.

Black Aztec Corn  –  Sometime back in the 1860s a seed corn was introduced into the USA from Mexico, purporting to be a variety of Corn grown by the ancient Aztecs and Mayans dating back to the time of Christ. Its true origins are uncertain – somewhat like the President Obama.

It also has some confusion as to its name, it is known as Black Aztec, Black Mexican and a few other names.

The stalks reach about 6 feet in height and the ears are roughly 8 Inches long.It can take as little as 70 days to mature under the best of conditions with premium seed, but may take as long as 90 days in some cases.

Painted Mountain Corn – Exceptionally rugged and cold hardy plants that were bred in the frigid cold Montana Mountains where temperatures go as low negative 50 degrees. They thrive at higher elevations, can withstand reasonable drought and produce a good yield in a fairly quick time frame.

Bred by Dave Christensen from multiple varieties of open pollinated corn. Varieties that went into the genetic mix are old heirlooms grown by native tribes for Centuries and homesteaders from the great white north.

Because of its genetic diversity, it is adaptable to multiple locations. The exceptionally colorful ears indicate a high nutrient content. Painted Mountain Corn can be eaten fresh like sweet corn, ground, roasted or made into a flour.

Baby Blue Jade Corn – A dwarf variety of Sweet corn. The ear is miniature although stouter and wider than standard corn, the kernels are the same size as normal corn kernels. Stalks reach no more than 3 feet in height and bear up to 6 ears each. When fully mature they are a steel-blue and transform to a delightful jade-blue when boiled.