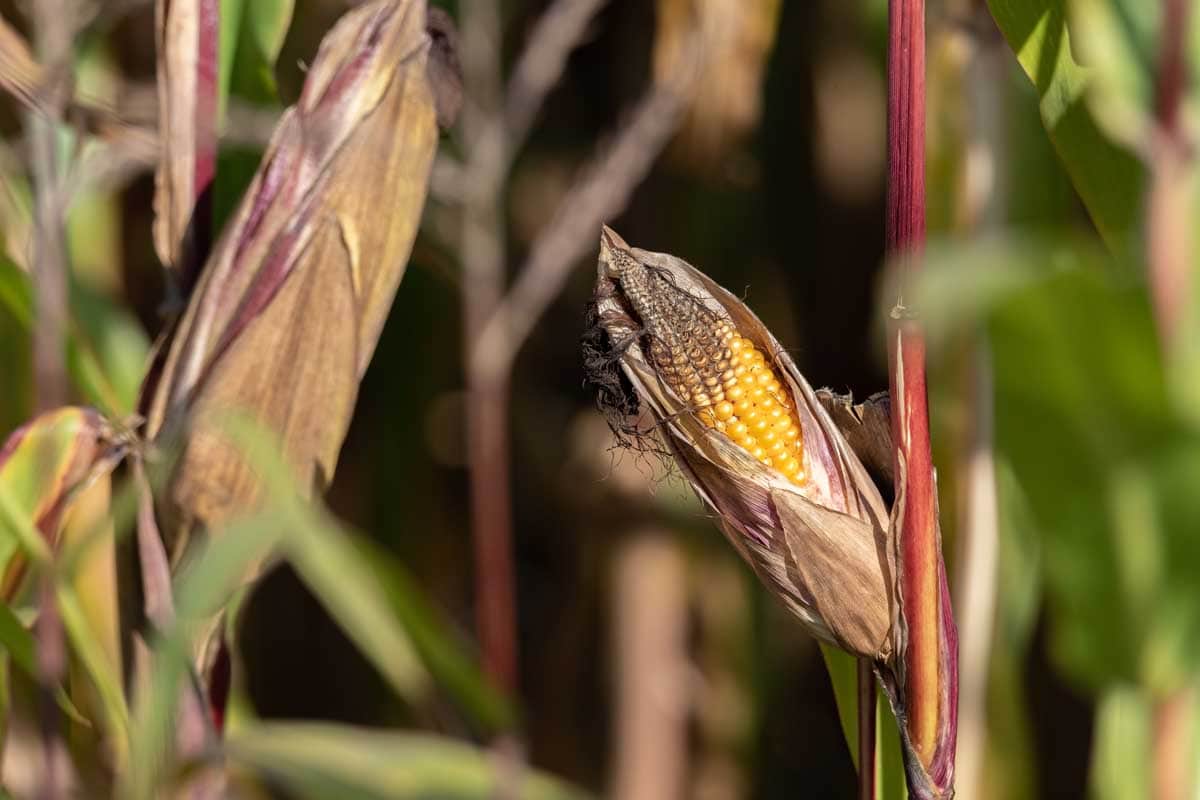 Corn plants will sometimes turn red to reddish-purple, generally later in the season. That’s not something you really want to see when you’re anticipating roasting or boiling some juicy ears of sweet corn.

The redness is indicative of a sugar accumulation in the leaves and stalks which results from too few kernels being developed on the ears.

During its active growth cycle, corn stalks generate sugar via photosynthesis which is used to fuel plant growth and generate the development of plant parts – in particular the ears of corn.

Stalks will produce enough sugar for the anticipated yield. When that yield fails to reach anticipated levels, the sugars are retained in the leaves and stalks.

The excess sugars in the plant is what produces the verying shades of auburn.

If your corn plants are turning red its too late to reverse it this season, consider it a lesson for subsequent seasons.

Now that you know the ‘why’ of how it happenned, if you plan to grow corn again you should understand the “how come””.

Inadequate pollination is the primary reason this occurs. Corn is wind-pollinated so you can’t blame this one on the honey bees. Environmental stress factors are the cause.

If you had hotter than usual weather in the timeframe that the plants are pollinated heat stress is probably the culprit. The plants survived the heatwave, but the kernels didn’t fare so well, many probably aborted and failed to develop.

You’ll still get some corn, but not a whole hell of a lot, and certainly not up to par so far as quality is concerned.

Related: What Causes a Watermelon to Split?

Cooler than usual night time temperatures are another possible cause, but are much less common than heat stress so long as you didn’t plant your corn way too early.

Other less common stress factors include water stress – if you didn’t water them – well what can I say but “as you sew so shall you reap”.

Insect and disease damage or exposure to herbicides all of which can, but rarely do cause the reddening of corn stalks.

There is a disease known as kernel red streak, but that only affects the color of the kernels, not their development, it does not cause kernel abortion.

In summary, here’s some reasons your corn may be turning red:

See: Why Are My Tomato Leaves Turning Purple