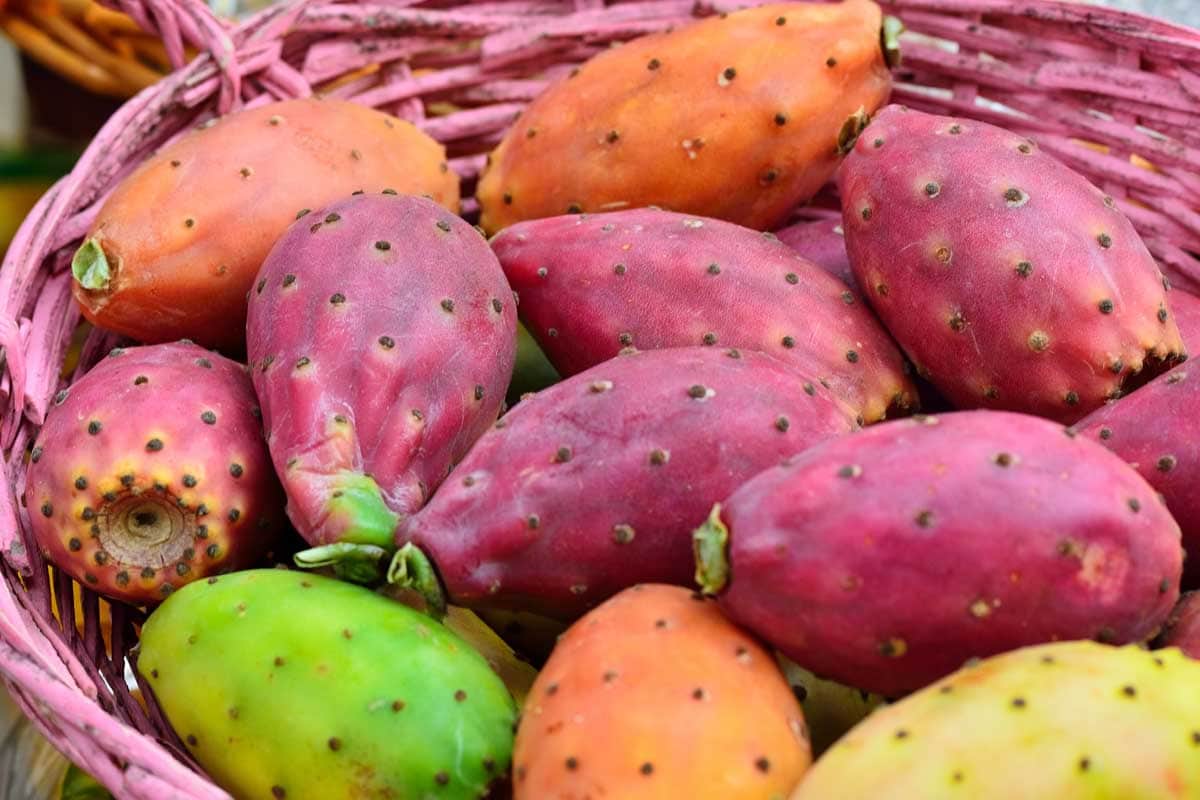 Are prickly pears edible? What do they taste like? Below you will find a list of prickly pears and what to expect when it comes to taste.

There are dozens of species of Prickly Pear that fall under the scientific classification ‘Opuntia‘. They produce a tasty edible fruit commonly known as Prickly Pears. There are also many non-native varieties and identification is at times a tad tricky.

They produce leaves that are flat paddle-like to cylindrically shaped which in turn produce the edible prickly pears. They bear vibrantly colored flowers from stunning shades of red to bright yellow.

Most sub species are somewhat tolerant of cooler climatic conditions than other cactus.

Various varieties differ in shape and size, from some that are almost as big as a tree to others that are suitable for a groundcover.

Grown outdoors they fare best in zones 7 to 10, but as a potted plant, they can be grown just about anywhere and transported indoors in inclement weather.

One of the most common and well known prickly pears.

Indian Fig Prickly Pear is grown commercially in desert regions for its abundant flushes of sweet prickly pears which are found in markets in the US and Canada.

They are sometimes referred to as ‘tuna’ which is mutilation of its scientific name ‘Opuntia’. The prickly pears are eaten fresh or incorporated into a number of dishes, drinks, candies, and preserves.

Seeds should be aged at least a year before making an attempt to germinate them. They should well dried and free of pulp before planting.

They ripen in late Summer and early Fall. When fully mature they are fire engine red and the interior flesh and pulp are burnt orange. Other varieties are sometimes yellow on the outside and honeydew green on the interior.

Includes several varieties, produce a lavender to purple blush on their pads. The blush is known to intensify on some varieties under drought conditions.

Best suited as an ornamental plant outside of its native region. They do not produce well unless conditions are near perfect.

Suitable as an edible ground cover as they grow in ground-hugging clusters and produce miniature pads and smaller fruits.

Has been compared to a kiwi.

It has bluish-green pads. Variant shades of purple can be striking at times. Cooler temperatures enhance the purple hue. Used as an edible fruit as well as for its outstanding beauty. The taste is pleasant, mildly sweet.

It has a sweet honey like flavor and smooth texture.

A bit bland, something like an under ripe honey dew.

A Sour Prickly Pear, and best not eaten fresh – unless of course, you are one of those folks who like sucking on a lemon. It is used in Mexico in sauces and as a spice.

Is tart but nearly as tart or sour as Xoconostle. Its seeds are also eaten fresh.

One of my favorites, but its hard to find. It tastes like a cross between bananas and mango.

Has a mildly sweet yellow flesh that simultaneously betrays a tad of tartness.

We hope you have enjoyed this list of edible prickly pears. If you are on a journey of finding some or already have found one and want to to know what it tastes like, you now know what to expect.

Kiwi Strawberry is it Real or another Hoax