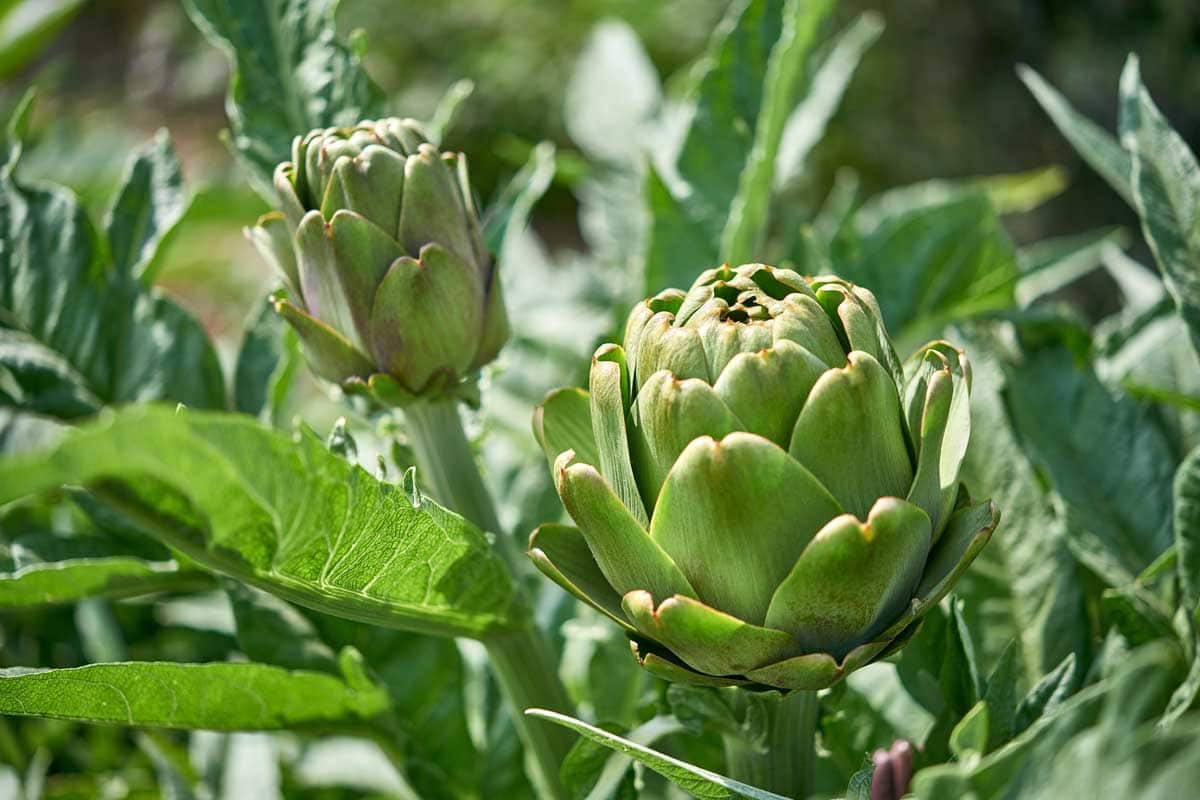 Artichokes are a not popular garden crop in most areas, they are , as the expression goes “an acquired taste”. If you have at least 100 frost-free days in your area you can grow artichoke. The artichoke is generally grown as a perennial, but can also be grown as an annual.

I have been growing a modest amount for years, they are a tasty and healthy dish when properly prepared.

There are actually two distinct varieties of crops referred to as artichokes. This article deals with globe artichokes, as in the illustration . The other “artichoke” – Jerusalem Artichoke, is not really an artichoke and not even remotely related to true artichokes.

Jerusalem Artichoke, also known as “sun-choke” and casava in some places is actually a type of sunflower or, more correctly, the tuberous roots of a type of sunflower. It is perennial living from year to year. The edible tubers resemble potatoes but are rough and knobby and have a crisp texture, much like that of water chestnuts.

Cardoons are very similar to Globe Artichoke, but is in the sunflower family like Jerusalem Artichoke. It is grown primarily for its flower buds and stems both of which are edible. The buds are most commonly sought after. They are prepared and eaten in the same fashion as globe artichoke.

The globe artichoke is closely related to the thistle. The part we eat is from the immature flower bud. If the buds or “globes” are not harvested, six inch bluish thistle-like flower heads develop.

The edible portion of the “globe” is composed of the fleshy bases of the flower bracts and the receptacle to which the bracts are attached, known as the “heart”.

4. If seeds are soaked ensure the potting mix has adequate aeration ability or the seeds may rot. The potting mix should have vermiculite, perlite or other inorganic matter to add aeration.

Rootstock can be purchased from a nursery or alternately, a healthy plant can be dug up, the root divided into two or more parts and replanted. Root sections should be set at 6″ – 8″ deep in the soil. Irrigate the soil thoroughly before planting.

As the name implies, direct seeding is planting artichoke seed directly in the ground. Direct seeding is not recommended for home growers, the success rate is much lower than with other methods, there are simply too many variables.

If you would like to try direct seeding anyway it can be done where winters average above 15 degrees F.

Seeds should be sown in the early autumn. Soak them for 2 days to soften the seed-coat, and then hold the moist seed for 2 -3 weeks at temperatures around 40 F in a well ventilated area, lack of aeration can result in delayed germination as well as cause seed to rot.

Sow the artichoke seeds approximately 1/4 inch deep in lightly moistened soil. be sure the soil is adequately drained or the seeds will probably decay before germinating.

Artichoke seeds, even when successfully direct seeded will occasionally yield an herb that is a throwback to its thistle ancestry, they don’t always grow true their labeled variety.

Artichokes won’t reach their full potential if planted in cooler climates. Freezing temperatures will kill the plants before they can reach full potential therefore a tighter spacing may be used.

Artichoke plants can reach a height of 3 or 4 feet and a spread of up to 6 feet in diameter so allow plenty of space for them to grow.

In Zones 7 and above, plant the artichokes to the side so that the more frequent planting of annual vegetables won’t disturb them. Space the artichoke plants at 4′-6′ feet within the row with 6 to 8 feet between the rows.

On the other hand, artichokes won’t tolerate standing in water, so plant the artichokes either on mounds or in rows with irrigation furrows.

Irrigate the artichokes about once a week; irrigate more often in warm areas and less often in areas with heavy soil.

The Artichoke pre transplant seedlings require a lot of nutrients as they are developing, fish emulsion

is what I’ve had success with in the past and most growers will concur.

Artichokes need to be grown and harvested quickly for best results. You will need a high quality compost and well rotted manure in abundance each season.

Blood and Bone meal are also helpful, but on a monthly basis you should side dress each plant with a high nitrogen fertilizer. See Understanding Fertilizer Labels.

There are several insects that make themselves a general nuisance around artichoke and some fungal and disease issues as well.

Most are easily controlled when caught in time. See – Artichoke Troubleshooting.

The Globe Artichoke is a member of the Compositae family, closely related to the thistle. The part we eat is from the immature flower bud. If the buds or “globes” are not harvested, six inch bluish thistle-like flower heads develop.

The edible portion of the “globe” is composed of the fleshy bases of the flower bracts and the receptacle to which the bracts are attached, known as the “heart”.

‘ produces large heads that are nearly round and with a purplish tint. It has thick highly flavored scales. Plants grow 1.2 – 1.8 meters tall and up to 2.4 meters wide. Mature plants yield 12 – 20 buds each.

‘ produces large globe-shaped heads, up to 10cm in diameter, that are deep-green throughout Growing 1.3 – 1.5 meters tall, they are consistently heavy bearing and can produce a crop in their first year from seed.

‘Grande Beurre‘ produces large flattened spineless heads that are very consistent in size. They are fleshy and tasty. Growing to 2.4 meters tall, it has been selected for its ability to crop in its first year from seed and is sometimes grown as an annual. Good Luck finding seeds or root stock.

The Globe artichoke is actually an edible flower bud. It is harvested at an immature stage and selected for size and compactness. Overdeveloped Globe artichoke buds begin to open or spread; the bracts may have a brownish cast and are tough and stringy; the artichoke hearts have a fuzzy, pink to purple appearance.

As a perennial: For artichokes planted in the fall, harvest can begin as early as spring. Maturation and harvest will continue through the following spring unless interrupted by frost. Peak production occurs in spring.

As an annual: For artichokes planted in the spring, harvest in the fall.

Handle buds carefully during harvest to avoid bruising bud leaves. To harvest artichokes, cut the bud from the stem about 1″ – 1.5″ inches below the bud base. Buds allowed to become over mature will be loose, fibrous and inedible. Artichoke blossoms, however, are attractive as fresh or dried flowers.

After harvest, cut back old bearing stalks to ground level and mulch with rotted manure, or feed with a balanced fertilizer. New shoots, which grow from the base of the old stump, will develop their own stalks. Monthly applications of nitrogen fertilizer are beneficial for healthy growth.

Artichokes have a good shelf life. Put them in your refrigerator , they should also keep for a week or slightly more on a cool vegetable rack. Some blackening of the outer leaves can mean they were caught by a frost at the beginning or end of the season. 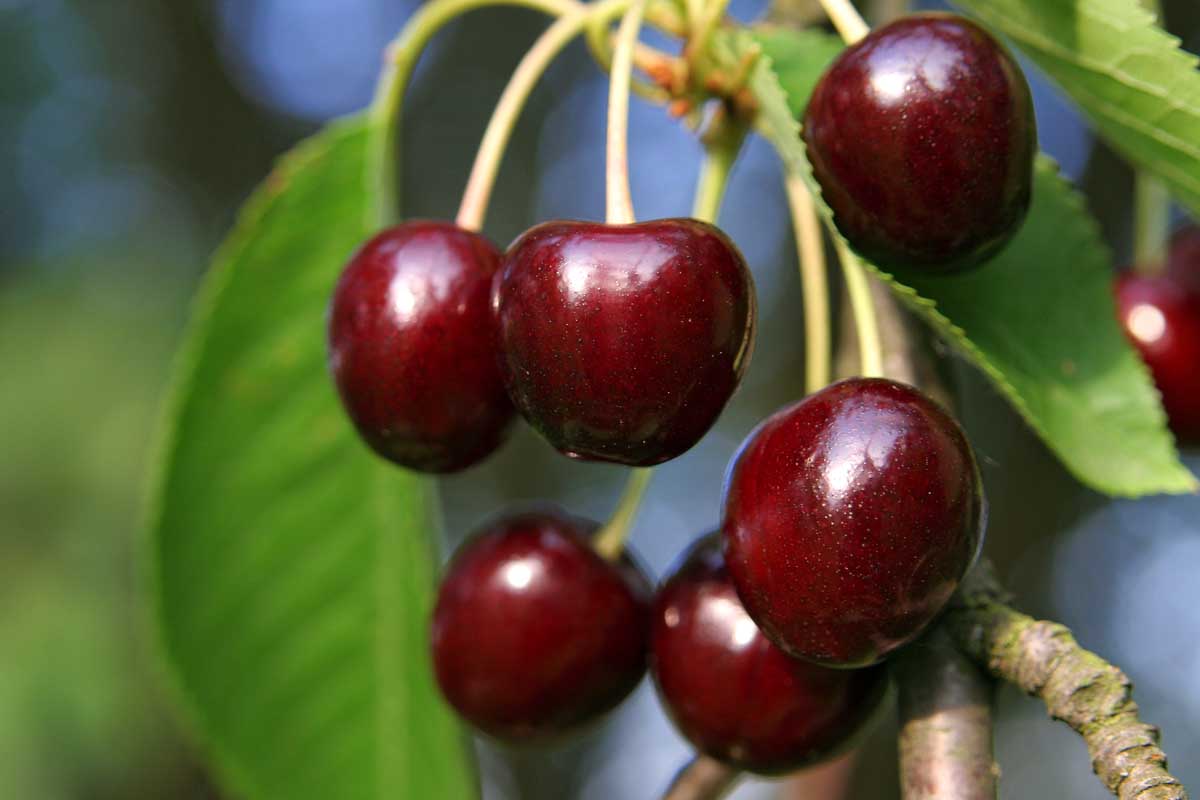 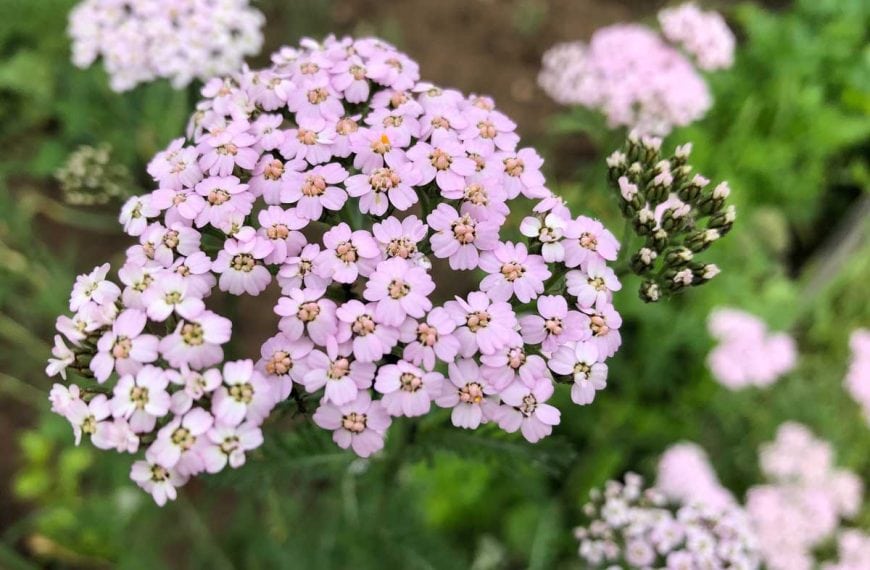 Yarrow Companion Planting: How Yarrow Benefits Plants in the Garden